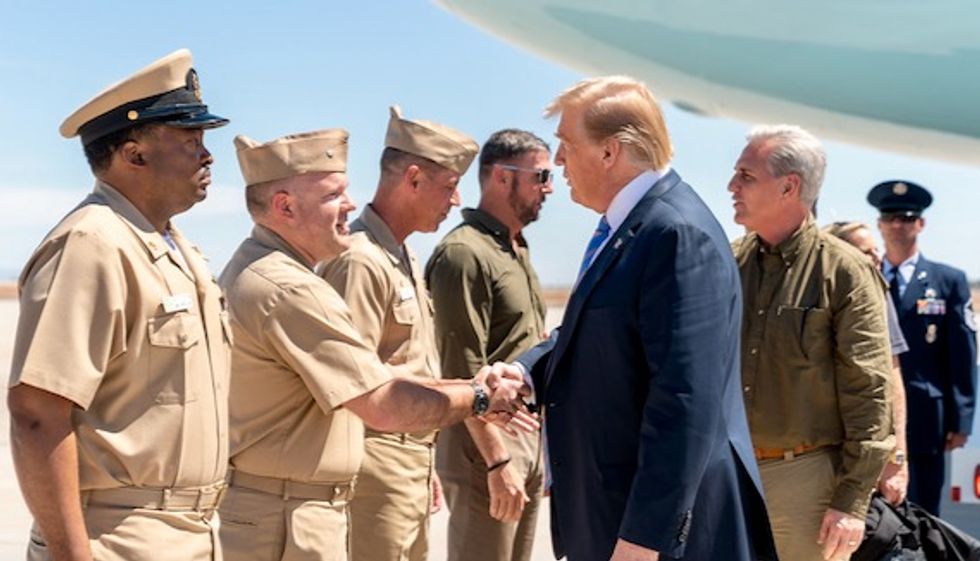 Under President Donald Trump, the U.S. military has spent more than $180,000 at the Trump Turnberry resort in Scotland while service members have been stopped at the Glasgow Prestwick airport, according to a Pentagon letter sent to the House Oversight Committee.

Politico first reported on and published the letter on Wednesday.

It reveals that since August 2017, the military has in the last two years or so spent $124,578 in expenditures on the property, in addition to an unspecified addition $59,729.12, as the letter explained:

Frustratingly, this accounting notes that in the two years prior to Aug. 9, 2017, the military also spent $64,380.78 at Trump Turnberry. This is significantly less than the amount spent in the time period in which Trump was the only president, and it leaves unclear whether the Pentagon was spending money at the resort while President Barack Obama was in office.

This is a key question that we need to answer to determine how corrupt the arrangement is. But make no mistake — the evidence as it stands shows a clearly corrupting relationship between the military and the president’s business.

The letter indicates that the rates paid at the resort were within the acceptable limit for military members abroad, but even if that’s true, it doesn’t eliminate the conflict of interest. The military is still spending money at a facility that is owned privately by the commander in chief. Even if Trump’s position had no effect on the military’s choice of accommodations, it still would reflect are corrupting and unethical conflict of interest. It’s unethical, in part, because the public can’t be confident that the president isn’t using improper influence to direct government funds toward his hotel, or that members of the military aren’t making choices that they believe will earn them favor from the president by helping to personally enrich him. It’s also not clear if the government was overpaying Trump by making unnecessary stops or staying longer than necessary, or if Trump was getting a leg up on his competitors by being in charge of the U.S. military.

The Pentagon has said reviewing the relevant procedures regarding travel accommodations, and the House Oversight Committee is continuing to investigate the matter.