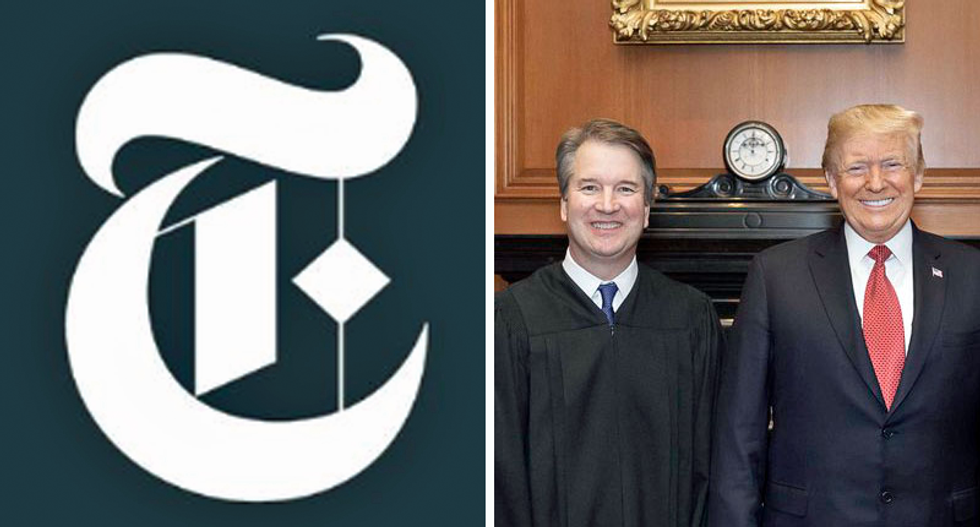 The results of a 10-month investigation into Supreme Court Justice Brett Kavanaugh by New York Times reporters Robin Pogrebin and Kate Kelly was published on Saturday.

But attention was taken away from the powerful reporting after the Twitter account of The Times opinion page posted a shocking message.

"Having a penis thrust in your face at a drunken dorm party may seem like harmless fun," read the tweet.

Kavanaugh has been accused by a fellow Yale student of having "thrust his penis" into her face. She claimed he "caused her to touch it without her consent."

The investigation found another, similar allegation that the FBI knew about but reportedly did not investigate.

"During his Senate testimony, Mr. Kavanaugh said that if the incident Ms. Ramirez described had occurred, it would have been 'the talk of campus.' Our reporting suggests that it was," The Times reported. "At least seven people, including Ms. Ramirez’s mother, heard about the Yale incident long before Mr. Kavanaugh was a federal judge. Two of those people were classmates who learned of it just days after the party occurred, suggesting that it was discussed among students at the time."

"We also uncovered a previously unreported story about Mr. Kavanaugh in his freshman year that echoes Ms. Ramirez’s allegation. A classmate, Max Stier, saw Mr. Kavanaugh with his pants down at a different drunken dorm party, where friends pushed his penis into the hand of a female student. Mr. Stier, who runs a nonprofit organization in Washington, notified senators and the F.B.I. about this account, but the F.B.I. did not investigate and Mr. Stier has declined to discuss it publicly," the newspaper reported.

People were shocked by the tweet, especially in light of the powerful new reporting.

@nytopinion What's a better way to phrase the idea that shoving your dick into a woman's face at a party is fun and normal?
— Cody Johnston (@Cody Johnston) 1568507435.0

@nytopinion It was not poorly phrased. It was evidence demonstrating your failure to hire people who would underst… https://t.co/LAW4IcwkOB
— Dr. Carol Quirke (@Dr. Carol Quirke) 1568506776.0

@nytopinion it wasn’t really an issue of style so much as substance. there’s no great way to phrase one’s endorsement of sexual assault.
— molly conger (@molly conger) 1568508259.0

Having people in positions of power and influence who think it’s “harmless fun” for a guy to stick his dick in a wo… https://t.co/GVoRAnIVGd
— Jessica Valenti (@Jessica Valenti) 1568508552.0

YOU CALLED HAVING A PENIS THRUST IN YOUR FACE HARMLESS FUN. We’re gonna need a lot more than this bullshit, New Yo… https://t.co/G16QsEYLOs
— Christina Reynolds (@Christina Reynolds) 1568506890.0

It wasn't "poorly-phrased," you feckless thimblewits. It was a spectacularly offensive *sentiment;* it wouldn't hav… https://t.co/z5NNcyRtl8
— Jamison Foser (@Jamison Foser) 1568507064.0

Poorly phrased? How about repulsive or vile or so odious that we instantly fired the hacks who wrote it and approv… https://t.co/5kDFc8idMt
— David Rothkopf (@David Rothkopf) 1568507123.0