On again, off again: The erratic history of negotiating with the Taliban 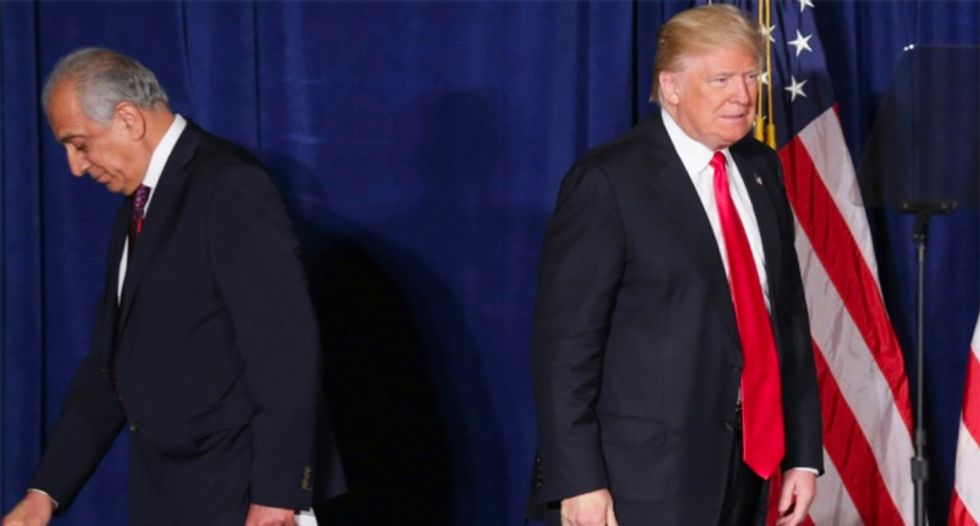 GETTY IMAGES NORTH AMERICA/AFP/File / CHIP SOMODEVILLA Donald Trump announced he had called off a secret summit with the Taliban and Afghanistan's leader, abruptly slamming the door on a year of diplomacy

A secret US summit with the Taliban and Afghanistan's leader, abruptly cancelled by President Donald Trump on Saturday, was not the first time Washington has sought a deal with the Islamists.

Since well before the US invasion Washington has tried to obtain promises from the Taliban, resulting in a tragic series of missed opportunities and all but guaranteeing suspicion around any new deal.

According to declassified documents, the Clinton administration secretly made contact many times with the Taliban in the years before the September 11, 2001 attacks by Al-Qaeda.

Washington feared the Taliban were allowing Afghanistan to be used as a safe haven for jihadists, particularly Al-Qaeda supremo Osama bin Laden.

They secured nothing but empty promises from the Islamists right up until 9/11.

After the US invasion the Taliban agreed to lay down their arms in exchange for an amnesty. The US declined the offer, vowing to destroy the regime, and Taliban fighters streamed across the porous border to neighbouring Pakistan.

They launched a bloody insurgency, inflicting colossal losses on Afghan security forces and bogging the US down in a grinding fight.

In 2013, the Taliban opened an office in Qatar. But an attempt at dialogue with the US from Doha was scuttled when they declared it an unofficial embassy for a government in waiting -- an unacceptable position for the US-backed government in Kabul.

Perhaps the best opportunity came when the Afghan government held its first face-to-face talks with the Taliban in 2015 in Pakistan.

It collapsed after news broke that Taliban founder Mullah Omar had died two years earlier, a fact the insurgents had kept secret.

In 2015, Afghan President Ashraf Ghani offered to recognise the Taliban as a political party in a bid to jump start peace talks. They ignored him.

In 2018, he renewed his offer and proposed a ceasefire marking Eid-al-Fitr, the festival celebrating the end of the holy month of Ramadan.

The Taliban did not reply, but announced their own unilateral ceasefire for the first three days of Eid.

It was the first three days of peace since 2001, and invoked moving scenes such as Afghans sharing ice cream with Taliban fighters. But afterwards, the violence resumed.

In May 2019, a loya jirga -- a large assembly of senior Afghan dignitaries -- called for an "immediate and permanent" ceasefire that the Taliban implicitly rejected.

In September 2018, the US appointed Zalmay Khalilzad as special peace envoy, launching a new push to talk to the Taliban as President Donald Trump sought a way out of Afghanistan.

Over several rounds of talks in Doha, expectations rose.

Talks focused on a timetable for withdrawal of US forces in exchange for counterterrorism promises, a ceasefire and the opening of negotiations with the Kabul government.

The Taliban have insisted the withdrawal of foreign forces is a precondition.

But Washington is seeking a "comprehensive peace agreement, not a withdrawal agreement" Khalilzad said, anxious to reach an early agreement in the run-up to the 2020 campaign for the White House.

The Taliban have long refused to negotiate with Ghani's government, branding Kabul a "puppet" of Washington.

However as the talks in Doha inched forward over the past year, they met with Afghan opposition members twice in Moscow.

Last July, Taliban fighters met in Doha with members of the Afghan government who had come "in a personal capacity".

Kabul has voiced anger at being sidelined from the talks in Doha, but the US-Taliban deal predicates an intra-Afghan dialogue to move forward.

In July Ghani formed a team of negotiators to hold talks with the Taliban.

Trump on September 7 announced he had called off a secret summit with the Taliban and Afghanistan's leader, abruptly slamming the door on a year of diplomacy.

The US president accused the Taliban of using an attack in Kabul, which he said killed a US soldier and 11 other people, to "build false leverage".