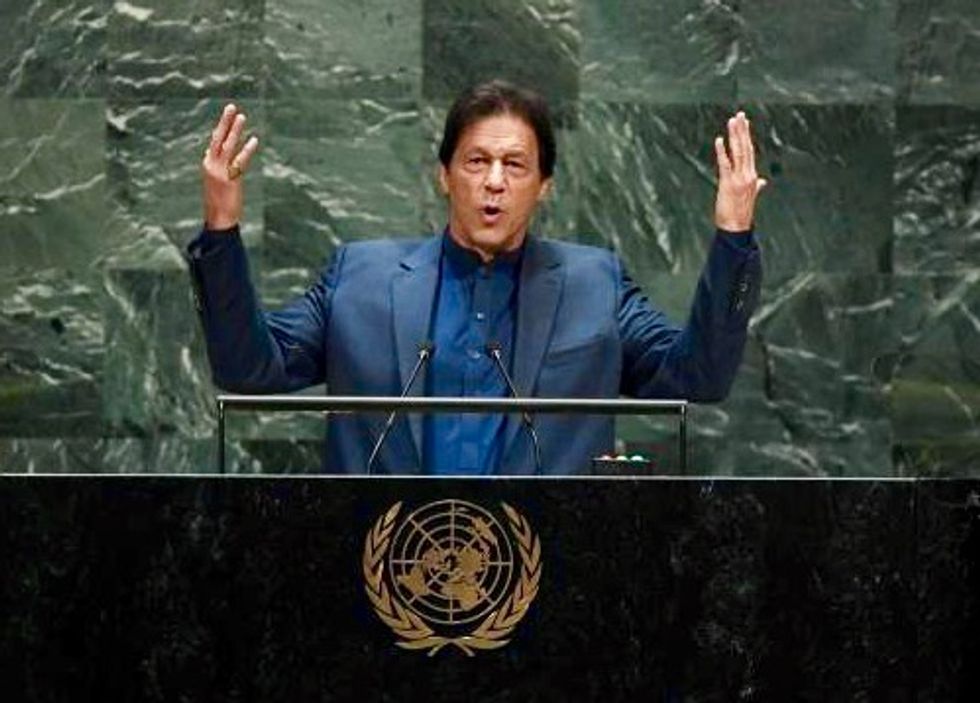 Pakistani Prime Minister Imran Khan warned the United Nations Friday his country's dispute with India over Kashmir could escalate into an all-out nuclear war that would have consequences for the world.

In a fiery speech lasting 50 minutes, Khan said India could unleash a "bloodbath" in the Muslim-majority territory, as the nuclear-armed rivals took center stage at the UN General Assembly.

His heated rhetoric stood in stark contrast to Indian Prime Minister Narendra Modi's address an hour earlier, when the Hindu nationalist leader touted domestic successes but made only an oblique reference to terrorism, taken to mean Pakistan.

The speeches occurred as thousands of rival protesters gathered outside the UN building to demonstrate, both against the clampdown in Kashmir and in support of Modi.

The Indian-controlled part of Kashmir has been under lockdown since New Delhi scrapped its semi-autonomous status in early August, and Khan said armed forces there would turn on the population after the curfew was lifted.

"There will be a bloodbath," Khan told the General Assembly.

The 66-year-old Pakistani leader warned there could be a repeat of the fighting between the nuclear-armed neighbors seen in February if India blamed his country for what he said could be a homegrown militant attack in response to repression.

"If a conventional war starts between the two countries, anything could happen. But supposing a country seven times smaller than its neighbor is faced with the choice: either you surrender, or you fight for your freedom till death," Khan said.

"What will we do? I ask myself these questions. We will fight ... and when a nuclear-armed country fights to the end, it will have consequences far beyond the borders," he warned.

"Free Kashmir, End the Siege," read banners during the pro-Pakistan demonstration, while on the pro-Modi side protesters held up placards hailing the Indian leader as a "visionary."

Khan said that the conditions in Kashmir were radicalizing a new generation and that he himself would take up arms in their situation.

"I've been locked up for 55 days, I've heard about rapes, Indian army going in homes, soldiers," he said, imagining himself as a Kashmiri.

Prime Minister Modi spoke earlier but did not explicitly mention Kashmir, choosing instead to focus on domestic policies such as development and sanitation.

He did however make an oblique reference to Pakistan, telling fellow leaders: "We belong to a country that has given the world, not war, but Buddha's message of peace.

"And that is the reason why our voice against terrorism, to alert the world about this evil rings with seriousness and outrage."

India says that Pakistan has fomented an insurgency in Kashmir by arming, funding and training militants.