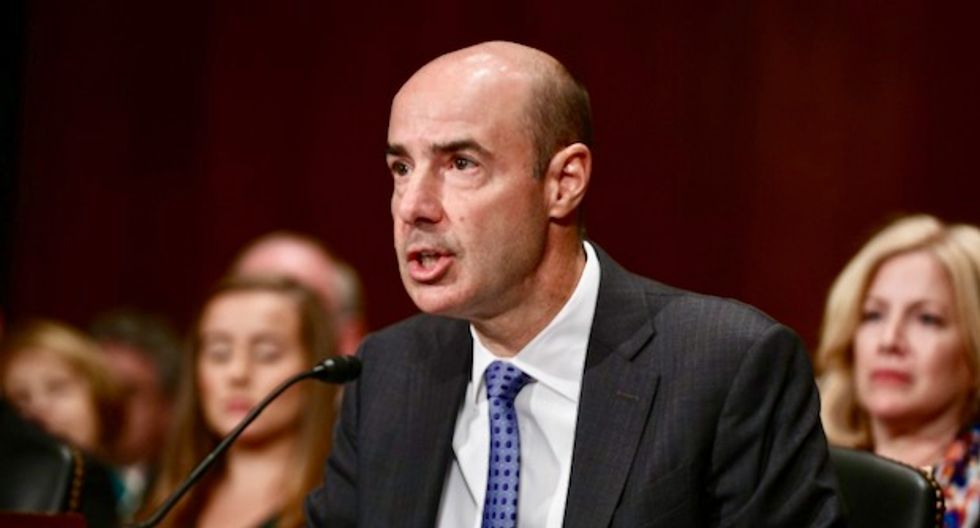 Eugene Scalia attends his confirmation hearing to become the next U.S. Labor Secretary in front of the the U.S. Senate Committee on Health, Education, Labor and Pensions (HELP) on Sept. 19, 2019. (Photo by Astrid Riecken/Getty Images)

"Scalia will undoubtedly be yet another stooge for rich and powerful interests at the very agency designed to curb that influence."

"For too long, our political system has prioritized the interests of the wealthy at the expense of regular, hardworking Americans," declared Morris Pearl, chair of the Patriotic Millionaires. "Scalia will undoubtedly be yet another stooge for rich and powerful interests at the very agency designed to curb that influence."

"Senate Republicans' decision to confirm him is an absolute betrayal to the American worker," Pearl added.

The new labor secretary, who is the son of late U.S. Supreme Court Justice Antonin Scalia, was confirmed by a 53-44 vote along party lines in the Republican-controlled chamber. Presidential primary candidates Sens. Cory Booker (D-N.J.), Bernie Sanders (I-Vt.), and Elizabeth Warren (D-Mass.) were not present for the vote, but both Sanders and Warren called out their Republican colleagues for approving Scalia, who has spent his career as a private attorney representing big corporations.

Sanders, a longtime advocate for workers, decried Trump's nomination and the Senate's confirmation vote as "obscene."

Warren concurred, tweeting, "This is a disgrace."

This is a disgrace. Eugene Scalia spent his career putting the interests of giant corporations ahead of American wo… https://t.co/7ufUmAcdbz
— Elizabeth Warren (@Elizabeth Warren) 1569547619.0

Sen. Kamala Harris (D-Calif.), a 2020 White House hopeful who voted against Scalia's confirmation, wrote on Twitter Thursday that "the last person we need in charge of protecting our labor force is someone with a record of putting corporate interests over working people."

Trump nominated Scalia in July, just days after former Labor Secretary Alex Acosta announced his resignation following mass outrage over a sweetheart deal he struck with convicted sex offender Jeffrey Epstein. In the months since then, advocates for workers have raised concerns about Scalia's record as both a partner in the Washington, D.C. office of the corporate law firm Gibson, Dunn & Crutcher as well as the Labor Department's chief legal officer during President George W. Bush's administration.

"Scalia becomes the seventh former lobbyist to hold a Cabinet-level post in the Trump administration," according to The Associated Press. "Disclosure records show Scalia was registered in 2010 and 2011 to lobby for the U.S. Chamber of Commerce."

As Patriotic Millionaires chair Pearl put it: "At every turn, Eugene Scalia has proven himself to be on the side of big corporations and Wall Street."

"He has never advocated for the workers who struggle for basic rights or for the millions of Americans decimated by the 2008 financial crisis," Pearl said. "But as secretary of labor, he will be charged with representing those same interests he's spent nearly two decades ripping apart."

AFL-CIO president Richard Trumka, whose union had implored the Senate to #RejectScalia, said in a statement Thursday that "it is insulting and dangerous that lifelong union-buster Eugene Scalia is the country's top labor official. His track record is well documented, and it's clear he has yet to find a worker protection he supports or a corporate loophole he opposes."

"Making the Labor Department—whose mission is to defend the rights of workers and enforce the law—a satellite office of a corporate right-wing law firm flies in the face of working people's clearly expressed desires," Trumka added.

Emily Martin, vice president for education and workplace justice at the National Women's Law Center, expressed worries about Scalia's oversight of the Labor Department's interpretation and enforcement of anti-discrimination laws.

"Eugene Scalia is charged with protecting working people—yet in his career he has shown no interest in upholding, much less advancing, their rights," said Martin. "For decades he has enabled employers to escape responsibility for protecting workers from discrimination—including sexual harassment, race discrimination, and disability discrimination. He has shown persistent hostility to the worker and consumer protections the Department of Labor is charged to uphold."