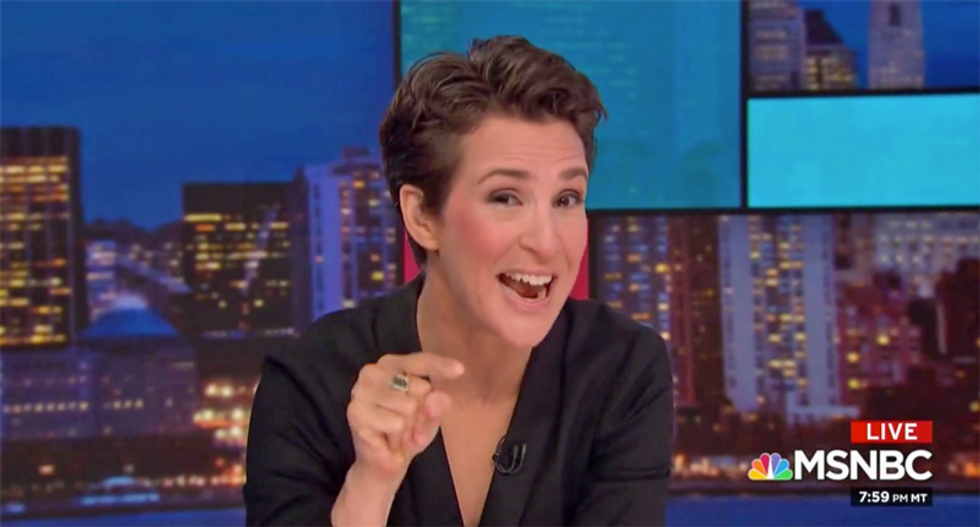 MSNBC's Rachel Maddow on Wednesday revealed how the Republican Party has chosen to disadvantage their own candidates running in the 2020 election.

"The next Democratic presidential debate kicks off tomorrow night in Houston and it’s only one night. Weird. Right? On the eve of that next democratic debate, ProPublica has just reported the national Republican Party is doing something new -- that can’t be good for their party’s candidates around the country sharing the ballot with Donald Trump next year," Maddow reported.

"According to ProPublica, the RNC is refusing to provide Republican candidates with data about how voters feel about President Trump," she explained. "They have always collected and sent out that data about whatever president is in office -- it helps people put together good local campaigns."

"But with President Trump, for some reason, they’re now withholding that data and not sending it out," she continued.

Maddow noted the article reported, "critical 'voter scores' — sophisticated polling-based analytics that the RNC provides to party committees and candidates — have conspicuously omitted an essential detail for any down-ballot race: how voters in specific states and congressional districts feel about Trump. Republican insiders believe these analytics are being withheld to try and prevent GOP candidates from publicly distancing themselves from the president or leaking unfavorable results that embarrass Trump."

"So, in the midst of everything else going on, the Democratic candidates are going on stage convincing people why they’re the best to run against and beat Trump. On the other side, the Republican Party is canceling their own presidential primaries all over the country so no one can run against Trump or if they do, no Republican primary voters will have a chance to vote for anyone other than Trump," she explained.

"And now on top of that, we know the national party is overtly hiding the data, keeping secret the data they have that would let would let any of their own candidates around the country decide rationally whether they, too, might want to run a little bit against Trump in order to save their own skin, because voters don’t like Trump," she said.

"This means the Republican Party would rather disadvantage their own candidates -- their own senators, their own members of Congress -- than risk any Republican taking any kind of stand against Trump or risking anybody leaking that information in a way that might embarrass the president. That, of course, is a capital offense in the Republican Party right now," Maddow concluded.