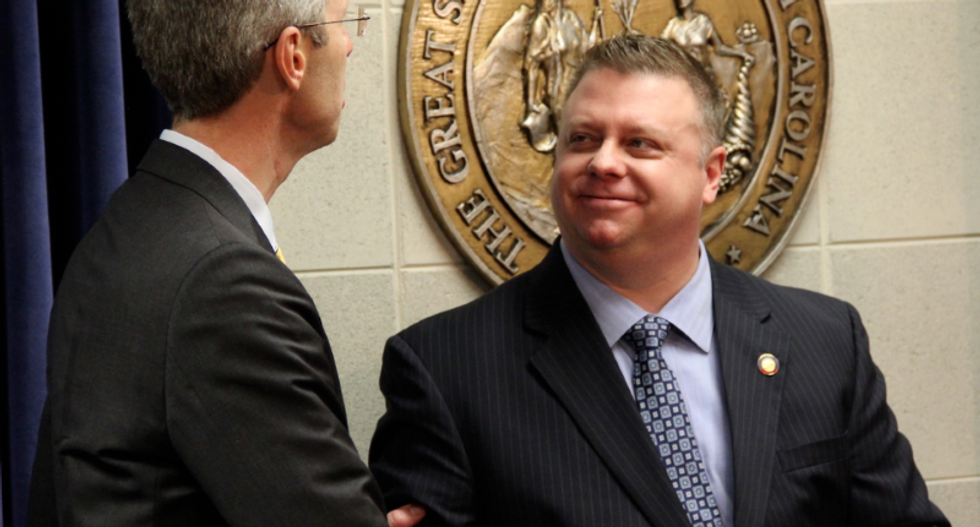 Republicans in the North Carolina House of Representatives have come under furious criticism for a vote overriding Democratic Gov. Roy Cooper's veto of their budget bill, which blocks Medicaid expansion and underfunds public schools. Particularly at issue is the way they passed it — in a surprise morning vote, with half the Democratic lawmakers busy attending 9/11 memorial services, after promising Democrats that it was okay to skip the morning session because no votes would be held there.

State Rep. Jason Saine, however, sees no problem with any of this. Indeed, he told reporters, if Republicans hadn't lied to Democrats and passed a partisan bill while they were away mourning 9/11, the terrorists would win.

"As a former firefighter and an American, I am appalled that anyone in our country would stop going about their normal business on this day," said Saine. "When we stop being a beacon of freedom, hope and democracy, then the terrorists win."

As Daily Kos' Jennifer Hayden noted, Saine's sentiment is not shared by the East Lincoln Volunteer Fire Department, where he had worked — although Saine disputed that he was in any way disrespecting their message:

@Scout_Finch I was asked specifically about us doing business in the House which was scheduled. I did not say we sh… https://t.co/tqmcb9im5C
— Rep. Jason Saine (@Rep. Jason Saine)1568230708.0