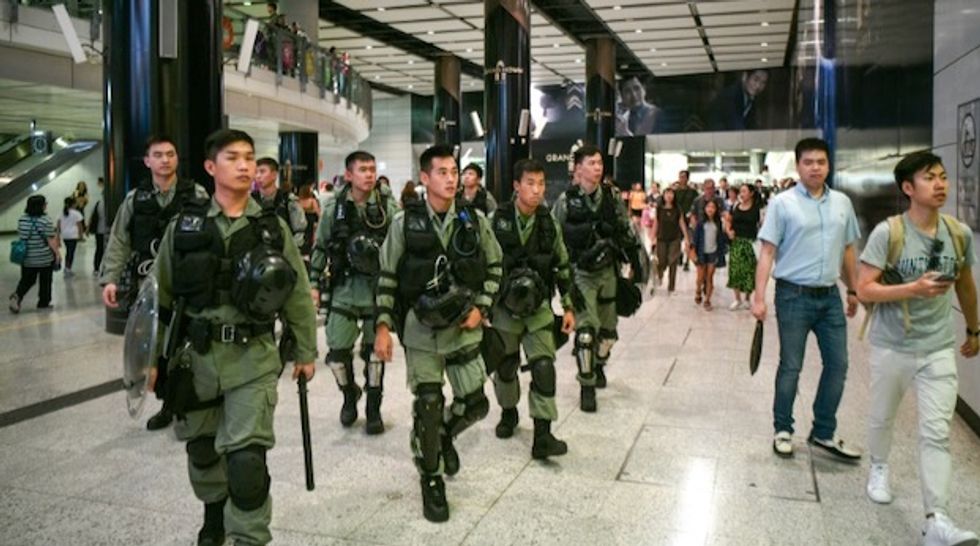 Riot police fanned out across Hong Kong on Saturday and thwarted plans by pro-democracy protesters to target the airport, days after the city's leader made a surprise concession which was rejected by the movement as too little, too late.

Millions of pro-democracy supporters have taken to Hong Kong's streets for the past three months in the biggest challenge to China's rule since the city's handover from Britain in 1997.

On Wednesday, the city's pro-Beijing leader Carrie Lam surprised many by announcing she was scrapping a hugely unpopular extradition law that sparked the widespread and sometimes violent rallies.

The withdrawal was one of the protesters' key demands and both she and Beijing had previously refused to budge on the issue.

Lam, who was not directly elected but appointed by an overwhelmingly Beijing-friendly committee, portrayed the move as a bid to de-escalate tensions and start a dialogue.

But it has been widely dismissed by protesters as an empty gesture after 14 weeks of clashes with more than 1,100 arrests and many facing lengthy jail sentences.

Online messaging forums used by the largely leaderless movement had called for protesters to "stress test" the airport on Saturday afternoon, filling up with suggestions for how to disrupt the road and rail links leading to the terminals.

But a large deployment of police at key bus, ferry and rail terminals across the city appeared to deter protesters from arriving en masse.

Tao Tsz Fung, 26, managed to get through the security checks and made it to the airport, along with a few dozen more protesters hanging around outside the terminal.

"There are just too many police around," he told AFP. "But we'll be out again tomorrow."

Some train and bus services to the airport were running a more restricted service while police performed multiple stop and searches, largely against young people.

At the airport itself, the atmosphere was calm but passengers had to queue to have bags searched and boarding passes checked before being allowed to enter.

"On the way to the airport, our bus stopped for some sort of searching. The police came into the bus and checked everyone," James Reis, a passenger who arrived nine hours ahead of his flight home to Portugal, told AFP.

In recent weeks, the airport -- the world's eighth busiest -- has become a repeated target of pro-democracy protesters as they try to ramp up pressure on Beijing and city leaders by denting Hong Kong's reputation as a stable business hub.

But the tactic is controversial because of the travel misery it causes -- and the fact that the target is not the state but ordinary people.

Last month hundreds of flights were cancelled over two days when huge crowds of protesters staged a sit-in at the airport, with ugly scenes playing out as two men suspected of being Chinese spies were beaten.

Previous protests at the airport had been non-disruptive and peaceful, aimed at enlightening travellers about the movement's goals.

Since the violent scenes, security has been ramped up around the sprawling hub -- which lies on reclaimed land west of the main city -- and access to the terminals has been restricted to those with boarding passes.

But last Sunday protesters returned to the airport and showed they could still wreak havoc.

Operators of the express train that links the airport and the city suspended services after the station was besieged and objects were thrown onto the rail line.

Roads we also blocked forcing stranded travellers to abandon their vehicles and drag their luggage for many kilometres.

Protesters have said their movement will only end when other key demands are met such as an amnesty for those arrested, an independent inquiry into the police and the granting of fully free elections, all of which Lam and Beijing have rejected.

At a peaceful rally on Friday night in the city's commercial district, many protesters said they planned to continue hitting the streets.

"It's too late now. In these three months, a lot of people have sacrificed themselves and been arrested," said a retiree who gave his surname as Cheng, bursting into tears as he spoke.

The same night, tear gas was fired at small groups of more hardline protesters who were shining laser pens at a police station in the district of Mongkok, an area that has seen repeated clashes.

They later built barricades and vandalised a nearby subway station. Protesters are planning a rally outside the US consulate on Sunday afternoon.