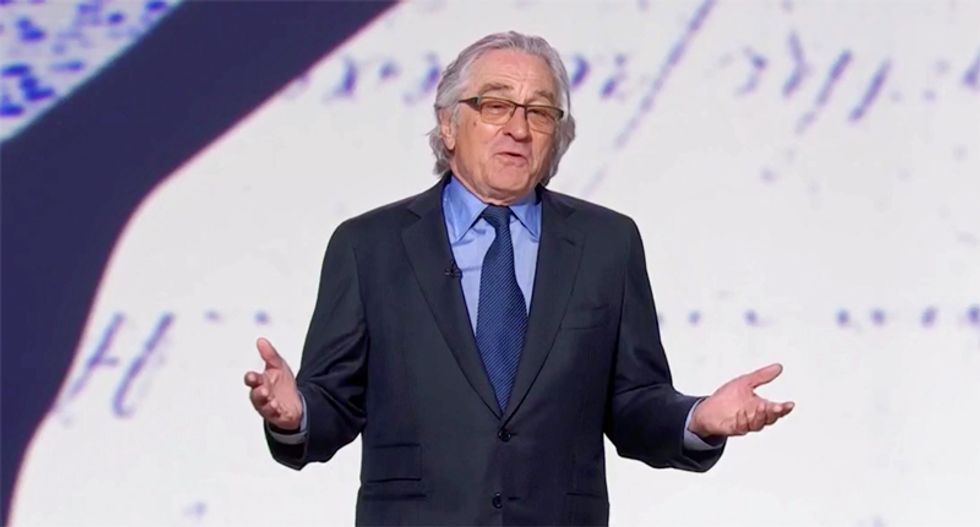 Legendary actor and Donald Trump foe Robert De Niro waited patiently as roasters bashed him before they went after Alec Baldwin. De Niro was mocked mostly for his age. But it was De Niro who had the last laugh.

When it was his turn to bring the funny, De Niro asked simply, "what the f*ck am I doing here?"

"This is like that Moscow hotel room where a bunch of whores pissed all over Donald Trump," he recalled.

When it came time to bash Caitlyn Jenner, De Niro said that there was something off about her, but he couldn't "put his finger in it."

"Yes, you can!" she encouraged.

De Niro noted that Comedy Central was eager to have Jenner on after her gender reassignment surgery because it meant they could pay her 20 percent less.

"Here's a historic fact: Alec's ancestors came over on the Mayflower. Alec's great, great, great, great, great grandfather was the first man to punch a Native American in the face," De Niro continued. "That's a fact. Now, Alec is doing it to paparazzi, and he doesn't care who he hits, I once saw him take a selfie and punch his own face. You've stared in big, huge blockbuster movies, Alec, and now you're hosting a f*cking game show? I'd say you're about a year and a half away from doing commercials for reverse mortgages."

When it came time to talk about Baldwin's portrayal of Trump on "Saturday Night Live," De Niro confessed that Baldwin "nails it, exposing Trump for the ridiculous, malignant, narcissist, bully, sociopath he is, but it's so good I want to punch both of you in the face."

He went on to say it was an honor to play Robert Mueller to Baldwin's Donald Trump, he just wished Mueller was willing to roast Trump as much as he did during the Comedy Central event.