Rouhani says US 'warmongering' against Iran will fail 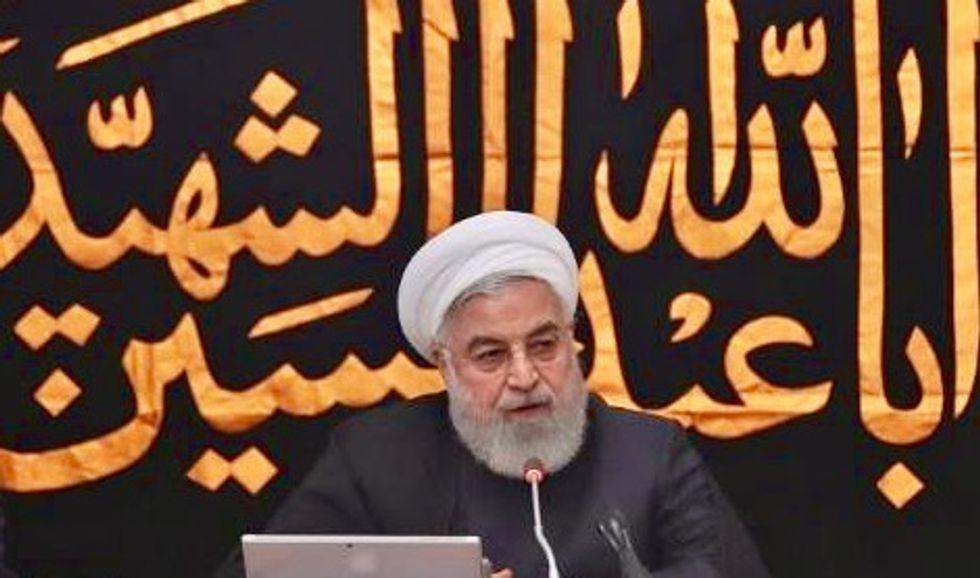 President Hassan Rouhani said on Wednesday that US "warmongering" would fail and warned that Iran was ready to further reduce its nuclear commitments in response to crippling US sanctions.

Iran also dismissed the possibility of a meeting between Rouhani and US President Donald Trump, hours after the White House signalled it was open to such an encounter.

"The Americans must understand that bellicosity and warmongering don't work in their favour. Both... must be abandoned," Rouhani told a meeting of his cabinet, according to the government's Twitter account.

"The enemy imposed 'maximum pressure' on us. Our response is to resist and confront this," he said, referring to the US campaign against Iran.

Arch-foes Tehran and Washington have been at loggerheads since May last year when US President Donald Trump unilaterally withdrew from a 2015 nuclear deal and began reimposing crippling economic sanctions.

Iran has riposted by scaling back its nuclear commitments in response to the US withdrawal from the deal, which gave it the promise of relief from sanctions in return for curbs on its atomic programme.

In his remarks on Wednesday, Rouhani said Iran was ready to comply with the Joint Comprehensive Plan of Action only if the Americans did so too.

"We have said many times that our policy... is one of peaceful (nuclear) technology, and that our approach in the JCPOA is commitment for commitment," he said.

"We have taken the third step... If it is essential and necessary in the future, we will take other steps," he added.

Iran said on Saturday it was firing up advanced centrifuges to enrich uranium at a faster rate -- its third step back from the 2015 nuclear deal.

It had already hit back twice before with countermeasures in retaliation for the US withdrawal from the accord.

On July 1, it said it had increased its stockpile of enriched uranium to beyond the 300-kilogram maximum set by the deal.

A week later, it announced it had exceeded a 3.67-percent cap on the purity of its uranium stocks.

Britain, France and Germany have been trying to save the nuclear deal and de-escalate tensions between Iran and the United States.

The idea of a Trump-Rouhani meeting was floated last month by French President Emmanuel Macron, who has been spearheading the European efforts.

Two of Trump's top lieutenants on Tuesday indicated he was ready to meet the Iranian president without preconditions, after the US leader sacked his hawkish national security adviser John Bolton.

Secretary of State Mike Pompeo and Treasury Secretary Steven Mnuchin stressed the United States would maintain its campaign of "maximum pressure" against the Islamic republic.

But Iran's UN representative poured cold water on any talk of a Trump-Rouhani meeting on Wednesday.

Majid Takht-Ravanchi said a meeting could take place only if Washington ended its "economic terrorism" by lifting all of its sanctions against Tehran.

The Iranian envoy said any meeting must also be held in the framework of the group of major powers that negotiated the 2015 nuclear deal.

"As long as the US government's economic terrorism and such cruel sanctions are imposed on the Iranian people, there is no room for negotiations," he was quoted as saying by state news agency IRNA.

The diplomat said Trump's decision to dismiss Bolton -- a hardliner accused of pushing Trump towards war against Iran -- was a matter for the Americans.

"The removal of John Bolton is an internal affair and we don't take stands on domestic issues," Takht-Ravanchi said.