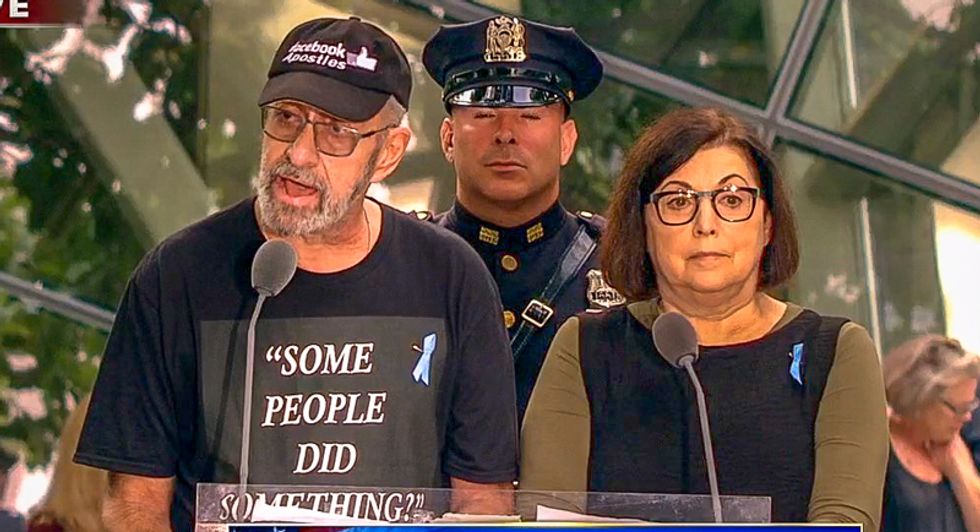 Man and woman read the names of victims during a 2019 ceremony to remember the Sept. 11, 2001 terrorist attacks (Fox 5/screen grab)

A 9/11 survivor attacked four Democratic congresswomen known as the Squad at a ceremony to remember those killed in the 2001 terrorist attacks.

At an annual ceremony in New York, the man interrupted the reading of victims' names to go on a rant about Democratic Reps. Ilhan Omar (MN), Alexandria Ocasio-Cortez (NY), Ayanna Pressley (MA) and Rashida Tlaib (MI).

The man said that he was at the ceremony to honor his mother, but his shirt referenced a quote from Omar -- "some people did something" -- that critics say diminishes the 9/11 attacks. The man's hat indicated that he is a member of the group Facebook Apostles.

"'Some people did something,' said a freshman congresswoman from Minnesota," the man remarked. "Today I am here to tell you exactly who did what to whom."

"We know objectively, there is no uncertainty about that," he continued. "Why your confusion?"

"Our nation's founding on Judeo-Christian principles were attacked," the man added. "That's what some people did! Got that now? We are here today, Congresswoman, to tell you and the Squad just who did what to whom. Show respect in honoring them, please. American patriotism and your position demand it."

"For God and country," he concluded, pointing to his "Apostles" hat. "Amen."

Watch the video below from Fox 5 New York.