'The future of earth is at risk': New drone footage of deforestation in Amazon shows cost of meat industry 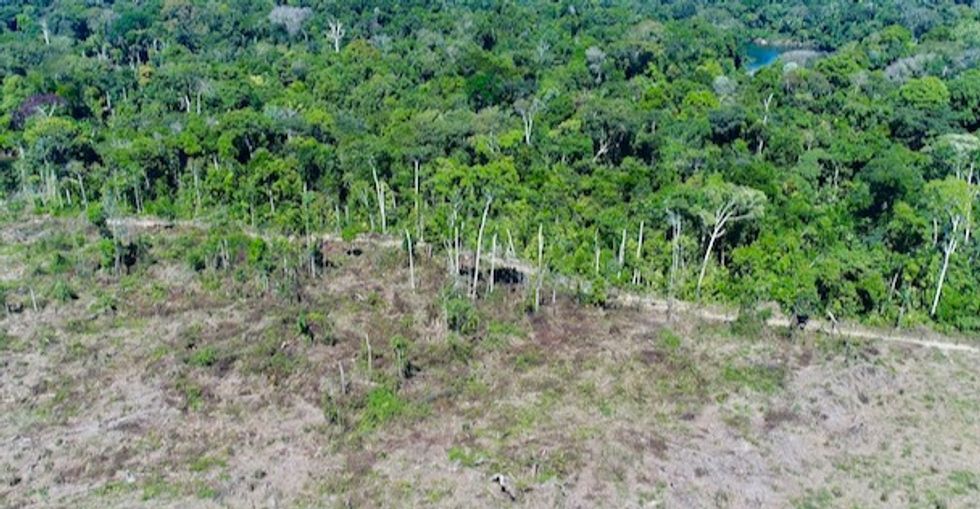 "Global demand for meat is destroying the Amazon rainforest."

A new investigation from the group Mercy for Animals uses drone footage to reveal the scope of devastation in the Amazon rainforest for growing meat.

"Global demand for meat is destroying the Amazon rainforest," filmmaker Mark Devries says in a video highlighting some of the group's work.

As Common Dreams has reported, the government of Brazilian President Jair Bolsonaro has accelerated the exploitation of the Amazon.

Devries explains that humans are taking the world's most precious rainforest resource for granted and cutting it down "at a rate of thousands of square kilometers a year."

"Why are we doing this?" continues Devries. "Mostly for hamburgers and the like."

BREAKING: Our drones flew above the Amazon rainforest to expose the REAL reason for its destruction. https://t.co/Wg4qNl2H2q
— Mercy For Animals (@Mercy For Animals) 1568897700.0

Mercy for Animals managing director Sandra Lopes, in a statement, said that "since the main cause of deforestation in the Amazon is meat production, it's imperative that governments, corporations, and individuals around the world take action to reduce global meat consumption and increase the availability of plant-based foods."

Global demand for animal products is killing forests in the Amazon. Changing our habits can help save them. https://t.co/GOWPlWmkTz
— Mercy For Animals (@Mercy For Animals) 1568817000.0

"The Amazon rainforest is a fundamental ecosystem for the planet and the climate," said Lopes. "If we don't act now to protect it, the future of life on Earth will be at risk."