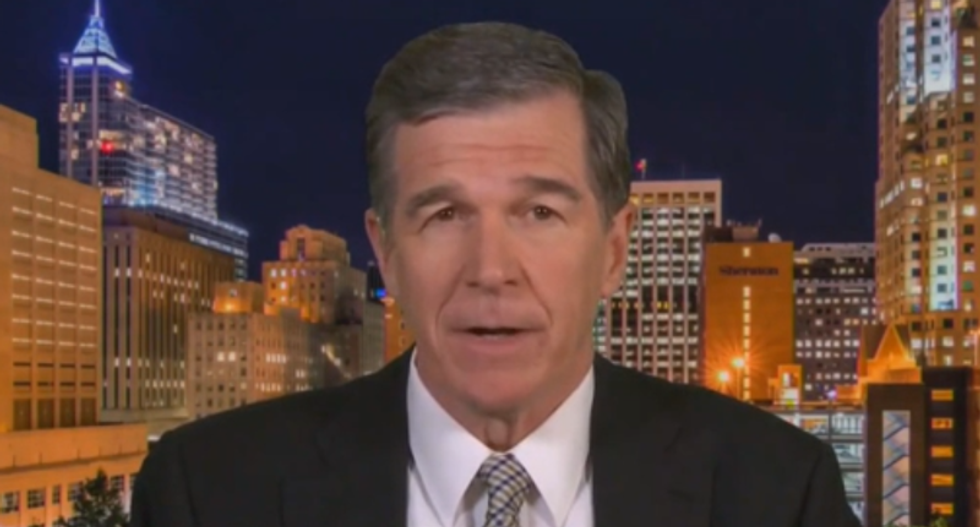 On Wednesday's edition of MSNBC's "The Beat," Gov. Roy Cooper (D-NC) laid into the GOP majority in the state House for underhandedly overriding his budget veto, after assuring Democrats no votes would be taken while they were attending 9/11 memorial services.

"What we saw today was an assault on democracy by the Republican leadership," said Cooper. "I vetoed this bad budget because it valued corporate tax cuts over investment and public education and denied health insurance to 500,000 working North Carolinians with Medicaid expansion. Over two months, instead of negotiating with me, this Republican legislature continued to try to override my veto. They did it by bullying legislators. They did it by bribing legislators. Even offering to move the entire Department of Health and Human Services to any legislator's county who would vote to override my veto. They couldn't get the votes."

"So what they did was lied," said Cooper. "They told Democratic legislators and they told the media that there would not be votes at 8:30 this morning on 9/11, a day when Americans should be standing in solidarity. They scheduled this vote and overrode the veto. And the people of North Carolina lost today, teachers lost today, working North Carolinians who don't have health insurance lost today, and it is wrong. It is wrong."

"Wrong as it may be, is it illegal?" asked anchor Ali Velshi.

"I believe it is," said Cooper. "I also believe that it is unethical. And the way they did it, these legislators are citizen legislators. And they have been showing up every day there's a session for over two months. One legislator had to get off her chemotherapy bed to get there. They missed family events. They have missed work in order to be there. And there have been some days when the Republican leadership has told them there's not going to be a vote. And this was one of those days."

"And I think it's all part and parcel of this Republican leadership and our legislature, which in fact is not reflective of who we are as North Carolinians," said Cooper. "They were elected under illegally gerrymandered districts. And I think it is the last gasp of a dying majority here. I was elected governor in 2016. I appointed by far the most diverse and qualified cabinet in the history of our state. I've been fighting offshore drilling, issued an anti-discrimination order, pushed for public education. And then we went last year and recruited enough people to run for the state legislature. And even under terrible districts, we were able to break the supermajority in both the House and Senate, and this year we've been stopping bad legislation, so they had to resort to trickery."

"And now our state courts, unlike the U.S. Supreme Court, our state courts have found partisan gerrymandering to be unconstitutional," added Cooper. "So now they're having to redraw their districts. And every single one of those House members and state senators are going to be up for election next year along with me running for re-election for governor. And there will be a judgment day in North Carolina."