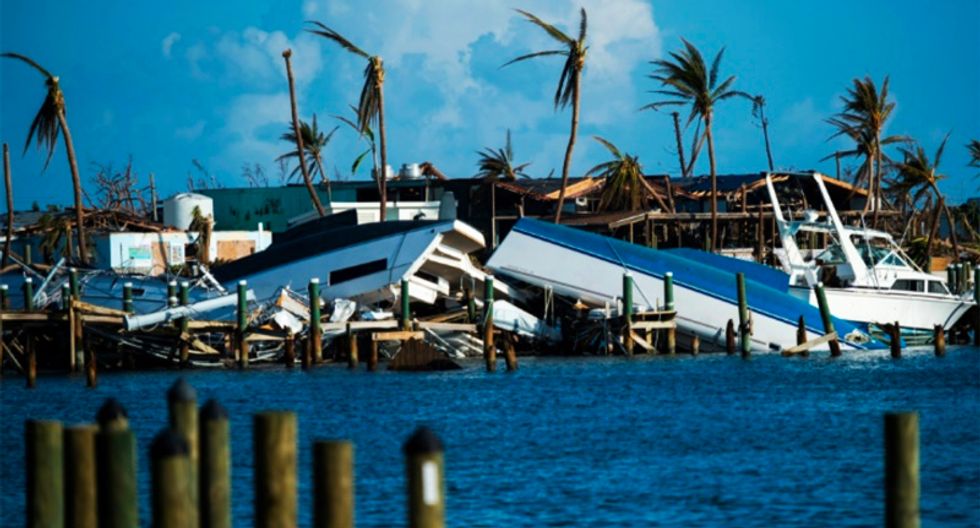 AFP/File / Andrew CABALLERO-REYNOLDS Destroyed boats are pushed up against the pier in the aftermath of Hurricane Dorian in Treasure Cay on Abaco Island, Bahamas

Tropical Storm Humberto lashed the Bahamas with rain and wind on Saturday, possibly slowing down relief efforts in the wake of the devastation wrought less than two weeks ago by Hurricane Dorian.

The US National Hurricane Center said the center of the storm, packing maximum sustained winds of 60 miles (95 kilometers) per hour, was passing Saturday evening about 85 miles north of Great Abaco Island, one of the areas hardest hit by Dorian.

Humberto was moving away from the Bahamas on a path taking it well off the east coast of Florida this weekend and early next week, the NHC said.

The storm is expected to strengthen into a hurricane on Sunday but is not forecast to impact the Bahamas or the US by that point.

"Significant storm surge is not expected in the northwestern Bahamas from this system," the Miami-based NHC said -- good news for residents of Abaco and Grand Bahama still trying to get back on track after Dorian swept through early this month.

But about two to four inches (five to 10 centimeters) of rain were expected in most areas, with isolated flooding in low-lying areas, the Bahamian National Emergency Management Agency (NEMA) cautioned.

"I know this is not something people in Abaco and Grand Bahama would like to hear at this time, but it's out there and the storm will bring heavy downpours over the Bahama islands," Shavon Bonimy, senior meteorologist in Grand Bahama, told The Nassau Guardian.

"So we have to be prepared."

NEMA spokesman Carl Smith told reporters on Friday that the storm would likely "slow down logistics" of relief efforts, but added: "We have contingency plans in place."

So far, the death toll from monster storm Dorian is at 52, but officials say that number is likely to go up. About 1,300 people are still unaccounted for, but Smith said officials are working to cross-reference new data and locate the missing.

Former Bahamian prime minister Hubert Ingraham said earlier this week he feared the final death toll could be in the hundreds.

Meanwhile 71 people were staying in shelters on Grand Bahama island and 2,037 in shelters in New Providence, where Nassau is located, Smith said.

"I just came back from Abaco. I must say (I) was horrified. I've never seen such a level of systematic devastation," UN Secretary General Antonio Guterres said Saturday after traveling to the islands the day prior.

"Hurricane Dorian has been classified as category five. I think it's category hell."

"We need to make sure that we reverse the present trend where climate change is running faster than what we are."

While he congratulated the Bahamian and other governments along with aid agencies who responded to the hurricane, he warned recovering from the disaster "will require a large investment" and said the country deserved the support of the international community.