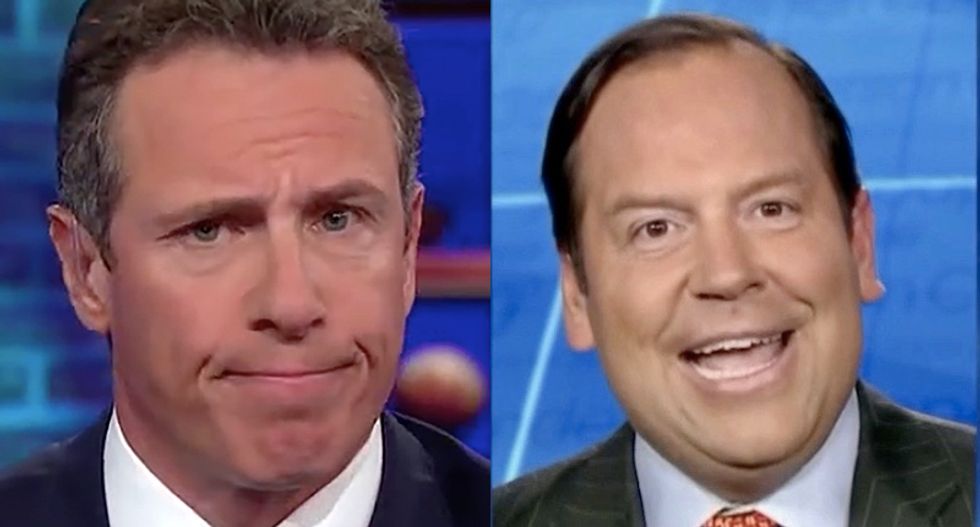 On Monday night, President Donald Trump received heavy criticism after a rally in New Mexico in which he turned to one of his Hispanic advisers, Steve Cortes, said he "looks more like a WASP than I do," and asked him "Who do you like more, the country or the Hispanics?"

Talking with CNN's Chris Cuomo on Tuesday, Cortes was completely undeterred from going to bat for Trump against accusations of racism.

"Forget about how he put what he put to you last night. He's not the greatest wordsmith. It was a little clumsy, you recognize that, none of that matters to me," said Cuomo. "Here's what matters to me. How can the Latino community believe that he loves them when he has said so many anti-Mexican and even anti-Puerto Rican things, how can he love Latinos when she's shown such animosity?"

"We can certainly go through the examples of what you claim is animosity toward Hispanics. But I think what Hispanics want from politicians is results," said Cortes. "What matters is the deliverables and making their lives better. In that score, the security and the prosperity of Hispanic Americans, of all Americans but particularly Hispanics, that's what we're focused on here, this president has been an amazing."

"You say here's what people want," said Cuomo. You are assuming that there is no basic question of dignity involved, that all it is is about their pocketbook. Sure we care about our pocketbooks, me, you, of course. But when you are a member of a group that has been denigrated time and time and time again, this man who described the caravans coming here as being mostly murderers and rapists and some I assume are good people and all this stuff about the s-hole countries and what he said about the people of Puerto Rico. You know it's reflected in his numbers. He's got a third of them at best. How do you think you get to a majority?"

"But a third of them, let's put them in context. A third of them is incredible compared to expectations," said Cortes.

"To somebody who says bigoted things about them all the time," added Cuomo.

"That is fake news," said Cortes.

"It's bigoted to say we're going to turn the border into a racial issue when it's not," said Cortes. "America is not a race. You are protecting Americans of color, whether they are brown, black or purple. The media has tried to make his tough border policies inherently or somehow systematically racist."

"Because he has depicted the people who are coming to the border as savages who are bombarding the gate," said Cuomo.

"Some of them are, Chris, we know that," said Cortes.

"Overwhelmingly they are not," Cuomo shot back.

"All of them, if they're coming illegally, all of them are committing a crime and all of them are unwelcome when they trespass in our country," said Cortes. "Some of them in addition are very dangerous. It's a very small minority for sure. They primarily wreak havoc against Hispanic Americans. The people who suffer the most from illegal immigration, from the ravages of illegal immigration, from the unfair wage market competition, from the very preventable crime of illegal aliens—"

"That's why he hires illegal workers and doesn't tell the truth about it, and that's why you guy drag Katie Steinle's family all over this country as an example of who we're trying to protect from these marauders at the gate?" said Cuomo. "Because he's worried about the impact to the Latino community?

"I talk a lot about a woman named Sandra Duran, a young Hispanic mother in Los Angeles who was killed by an illegal alien deported five times," said Cortes. "A beautiful, young, Hispanic American who is dead because we made a decision in this country to be soft on borders and California made a decision to be a so-called sanctuary city. I even hate that term because—"

"If you were so worried about preventable deaths, then you would attack poverty the way you attack the southern border," said Cuomo. "People, in a fit of desperation do stupid and sometimes even evil things as a product of it."

"Why aren't they polling for the president then?" said Cuomo.

"The poll I care about will be on Election Day," said Cortes. "I'm confident this president is going to do incredibly well among Hispanics."

"Why? Is he going to stop talking about them this way and stop separating kids at the border?" said Cuomo.

"And he wants to secure the border more than anything to protect Hispanic Americans," added Cortes. "And one of the reasons I know that is because he's told me that personally in conversations."

"He should say it to everybody else," replied Cuomo. "He's welcome to come on the show and make that case to the American people."