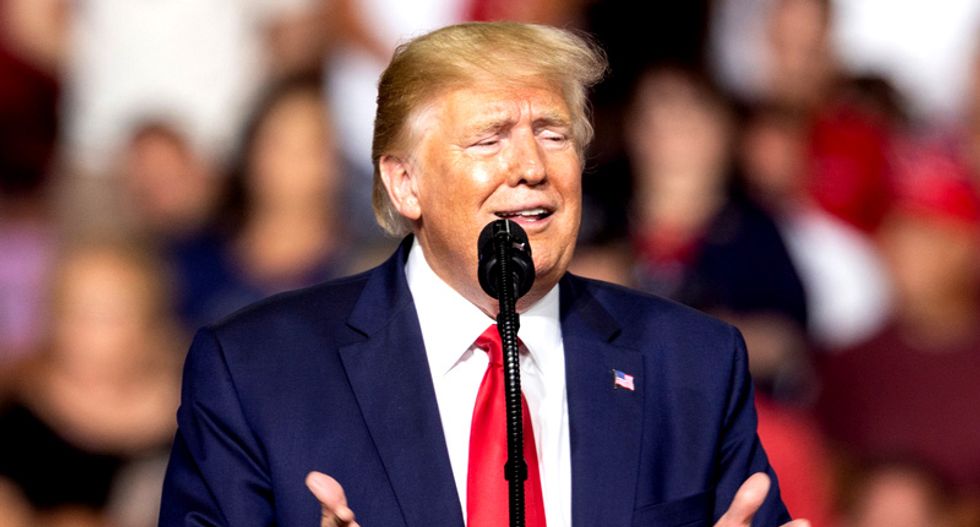 Over the past few weeks, Donald Trump has previewed his campaign against Joe Biden, still apparently the leading candidate for the Democratic nomination in 2020. "Joe isn't playing with a full deck of cards," barked Trump with his usual grace and originality, after the former vice president said something awkward about "black kids" and "wealthy kids."

The good-humored Biden has never hesitated to admit that he can be a "gaffe machine." But whatever you think of him, there is nobody in America with less standing than Trump to question Biden's cognitive capacity. It's just too easy to find the incoherent speeches, scraps of word salad and outbursts of embarrassing gibberish that have emanated continuously from Trump's mouth since his presidency began. Throw a dart at the calendar and look up what he said that day. You will be astonished and appalled.

In the latest instance, Hurricane Dorian appears to have blown through Trump's vacant brainpan with devastating force. Struggling as usual to express himself, the president informed us several times that he had "never heard of" a Category 5 storm, although he also said, "I know it's there." Which was it? Who knows? Certainly not Trump, despite the fact that during his lifetime, there have been 45 storms of that magnitude, including at least half a dozen since he entered the Oval Office.

He said the same thing about Hurricane Maria, and Hurricane Irma, too.

Which is almost as strange as when he observed that Hurricane Florence, only a Category 4 storm, was "one of the wettest we've seen, from the standpoint of water."

Even weirder than his chronic inability to recall the simple grading of tropical storms was his attempt to prove that Dorian was on course to strike Alabama. It never was. Having mistakenly tweeted out a warning to that effect, however, the president then produced a weather map that he (or someone) had defaced with a clumsily drawn bubble that included Alabama in Dorian's path. By now nobody is surprised when he or someone on his staff utters a falsehood. But how could he have expected anyone to fall for his bizarre cartooning?

Trump often appears to live in a separate reality, where imaginary events confirm his beliefs. So when he attempted last month to argue the fine qualities of Kim Jong-un, one of the dictators he adores, he noted that "the First Lady has gotten to know" the North Korean despot. Problems with that strange statement included the fact that Melania Trump has never laid eyes on Kim -- and that Trump suddenly interjected that fantasy, without any discernible purpose, into a discussion of U.S. relations with Iran.

These are not intentional lies, of which the nation's fact-checkers have long since compiled a list of thousands. Nor are they really gaffes, like the one about black kids that Biden instantly corrected. These are diagnostic exhibits -- and there are many more -- indicating Trump's mind and mouth are poorly connected in ways that raise serious medical concerns.

Yes, Joe Biden is a politician who sometimes misspeaks and even says things that aren't true, if not nearly as often or as brazenly as Trump. But it's the current occupant of the White House who should make you feel worried. If you aren't, then you may not have heard the warning laid out this week by a pair of highly qualified psychiatrists, who fear his decayed mental capacity poses a national security risk.

In an essay published online, Drs. David M. Reiss and Seth D. Norrholm suggest that the president's communicative abilities "appear to be deteriorating" and add, "We definitely believe that based upon his observed behaviors, it is clinically indicated that Trump undergo a full and comprehensive neuropsychological evaluation."

We can expect Trump to keep talking smack about the former vice president, but there is an obvious response. The Biden campaign could compile the longest blooper reel ever made. It will make us laugh, and it will make us cry.