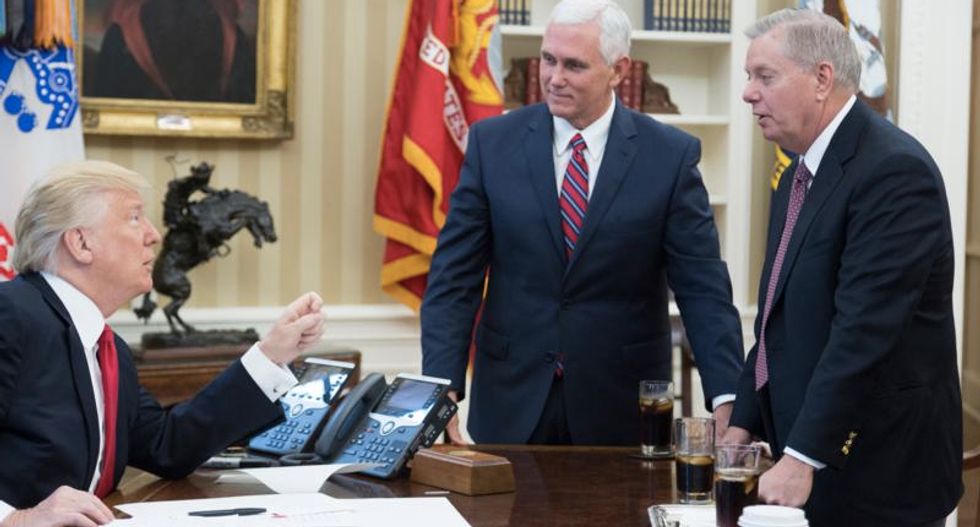 President Donald Trump and Sen. Lindsey Graham, once bitter enemies, have become close allies since the 2016 election as the South Carolina Republican realized it was in his personal interest to cozy up to the White House. But on Tuesday, fractures emerged between the two in public over a key issue for Graham: Iran.

Graham is on the severely hawkish wing of the Republican Party, and he clearly wants a war with Iran. He began a series of tweets Tuesday by praising Vice President Mike Pence’s briefing that day about the recent attack on Saudi oil infrastructure, saying he believes that “such a sophisticated attack could not have occurred without Iran’s blessing and direct involvement.” He called it an “an act of war” and lauded the Trump administration’s “efforts to create a regional coalition, thoroughly brief the Congress on the actions taken, and come up with a plan of action to restore deterrence against an evil regime in Iran.”

But after these words of praise for the executive branch, he offered a mild critique that was bound to get under Trump’s skin:

@VP The measured response by President @realDonaldTrump regarding the shooting down of an American drone was clearl… https://t.co/6JvC7DpXVA
— Lindsey Graham (@Lindsey Graham) 1568750285.0

@VP @realDonaldTrump The problems with Iran only get worse over time so it is imperative we take decisive action to… https://t.co/lXOtMXvkxu
— Lindsey Graham (@Lindsey Graham) 1568750308.0

Trump was not happy with saying his previous actions — pulling out from a direct strike on Iran at the last minute reportedly because of the potential for a high number of casualties — was a “sign of weakness,” even though Graham also called it “measured.” He responded:

It seems Graham was trying, by wrapping his criticism of the president in praise, to mildly nudge the president toward taking a more aggressive approach toward Iran. It’s hard to imagine, in fact, that Graham isn’t hoping for all-out war.

The attempt at persuasion was reminiscent of another exchange that played out recently on Twitter when Sen. Rand Paul (R-KY) and Rep. Liz Cheney (R-WY) argued over who Trump loves more. Paul, an isolationist, argued that he was Trump’s true ally, aligned with the president’s dovish instincts. Cheney, meanwhile, contended that the president is really more of a hawk, like her. They all know that Trump doesn’t handle criticism well, so they offer their opinions to the president in the guise of pretending they really already agree with him.

But it seems Graham wasn’t subtle enough and overshot when he tried to critique Trump’s previous decision — and the president didn’t buy it. Whether Trump will, nevertheless, be pressured into or decide to launch a needless and disastrous war in Iran, it’s hard to say.