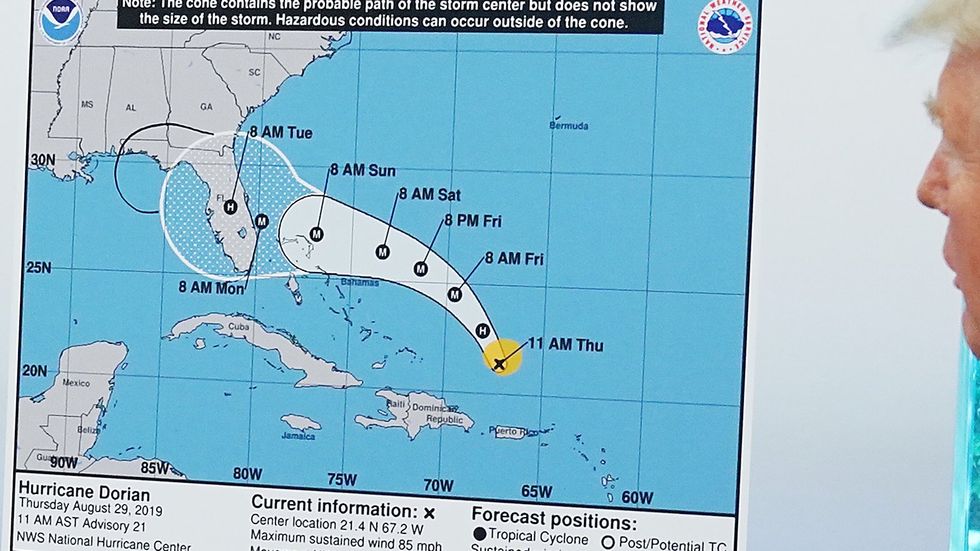 This is just getting tiresome.

After repeatedly humiliating himself in an attempt to defend his false claim on Sunday that Alabama was among the states that "will most likely be hit (much) harder than anticipated" by Hurricane Dorian — a claim quickly refuted by government experts — President Donald Trump shared a map \ Wednesday night on Twitter that he claimed vindicated him. (This was a different map than the one he showed in the Oval Office, which had apparently been clumsily falsified, seemingly with a Sharpie.)

But this new attempt to defend his mistake didn't actually help. The map was from Aug. 28, as the map itself showed, long before Trump's false claim on Sept. 1, at which point the forecast had changed and become more precise.

And the text at the bottom of the map even further undermined Trump's defense.

That text revealed that the prediction apparently came from the South Florida Water Management District and that the National Hurricane Center would "supersede" its predictions.

It even adds: "If anything on this graphic causes confusion, ignore the entire product."

And, as we know, the predictions had tightened by Sunday when Trump made his false claim about Alabama. Even after the National Weather Service corrected him, Trump refused to back down from his false claim, even though the very evidence he's now citing says he should have done exactly that.