Trump's California donors are freaking out about the social consequences of attending his fundraisers: report 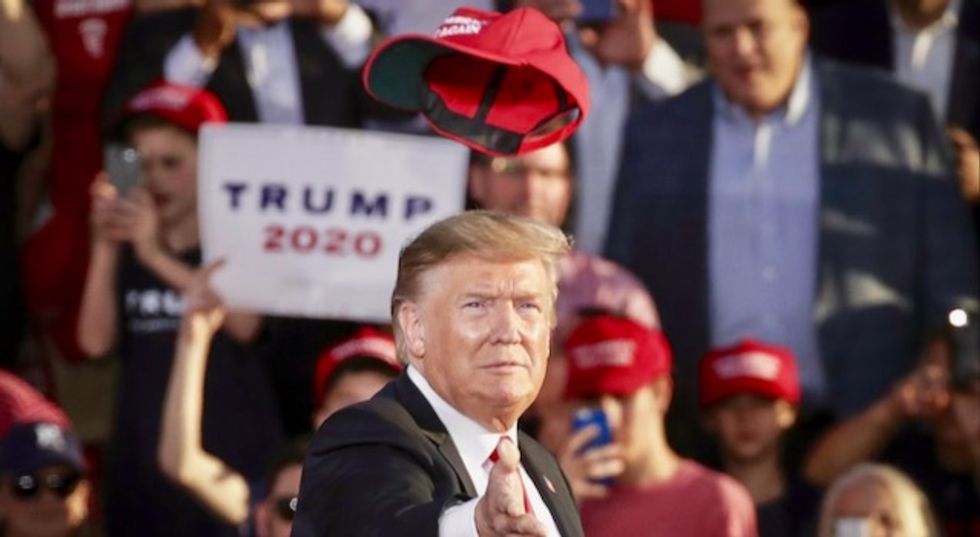 Drew Angerer, Getty Images, AFP | US President Donald Trump tosses a hat into the crowd as he arrives for a 'Make America Great Again' campaign rally in Montoursville, Pennsylvania, on May 20, 2019

President Donald Trump has generated a huge amount of election campaign money from fundraisers in California — a state where he is underwater 30 points and an epicenter of legal and legislative opposition to his agenda.

Fundraisers in California are incredibly lucrative for the president, as the state is home to a number of tech and entertainment millionaires. But its heavily liberal lean has many of his donors scared of social consequences for their support — and according to Politico, that fear is leading the Trump campaign to cloak these events in secrecy.

Four events are planned early this week, including two events in Beverly Hills, one in Silicon Valley, and one in San Diego. Thousands of GOP donors, bundlers, and state party officials are looking to participate — but security concerns persist.

"Attendees at Tuesday’s event are not being provided with the address of the actual lunch — they are being told to meet at a shuttle location, sources said," according to Politico's Carla Marinucci. "The concern comes after news of the Hollywood-area fundraiser sparked controversy when actors Debra Messing and Eric McCormack called for outing attendees. Demonstrators have been trying to ferret out locations of the fundraisers, promising to stage protests and appearances by the giant 'baby Trump' balloon."

"The president’s last campaign foray to the Bay Area, at an April 2016 GOP convention in Burlingame, didn’t go so well — it featured the sight of Trump climbing a highway median to avoid protesters who blocked his hotel entry," added Marinucci.