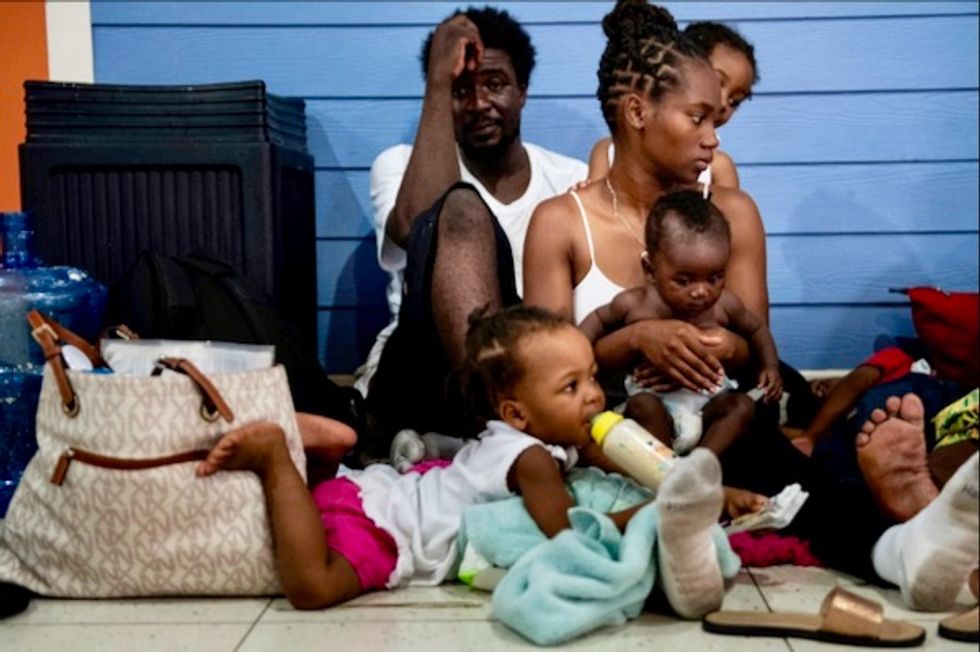 Ronald Samuel and his wife, Kimberley Samuel, shelter with their children at Marsh Harbor airport in the Bahamas AFP / Brendan Smialowski

"The survivors of Hurricane Dorian are climate change refugees fleeing disaster, and they deserve compassion and support, not isolation and exclusion," said the Sunrise Movement

Echoing the racist and dehumanizing rhetoric he has repeatedly deployed against Mexican immigrants, Muslims, and others, President Donald Trump on Monday told reporters—without offering a shred of evidence—that there may be "very bad gang members" and "drug dealers" among those fleeing the Bahamas in the aftermath of Hurricane Dorian.

The president's comments sparked outrage, with the Sierra Club responding that "Donald Trump's racism and cruelty knows no bounds."

"He needs to do his job and respond to the ongoing humanitarian crisis," the group tweeted. "We rise in solidarity with the Bahamian people."

Trump's remarks came hours after hundreds Bahamian refugees were ordered off a ferry headed for Ft. Lauderdale, Florida, purportedly because they did not have U.S. visas. Brian Entin, a reporter for WSVN 7 News in Miami who was on the vessel, said "this is not normal" and noted Bahamians can usually travel to the U.S. with just a passport and a printout of their police record.

"We have to be very careful," Trump told reporters Monday, defending the decision to remove hurricane victims from the ferry and warning that "very bad people" could be attempting to enter the U.S. after Dorian devastated the Bahamas, killing dozens and destroying tens of thousands of homes.

In a statement Monday night,  Varshini Prakash, co-founder of the youth-led Sunrise Movement, said the move to deny hurricane victims entry is "disgraceful and goes against everything we are supposed to stand for as a nation."

"These are people whose homes and livelihoods have been totally destroyed, who have lost family members," said Prakash. "But instead of welcoming them with open arms and offering support, we're sending them back to an island with little shelter, no food, and no access to basic necessities."

Prakash said Sunrise and allies are planning to rally outside Customs and Border Protection (CBP) offices in Washington, D.C. on Wednesday to demand that the Trump administration "stop turning away people fleeing destruction."

"As the climate crisis makes storms like Dorian stronger and deadlier, will we build bigger walls and keep polluting and making the crisis worse, or will we give the most vulnerable a safe haven in their time of most dire need and commit ourselves to tackling this crisis?" added Prakash. "The survivors of Hurricane Dorian are climate change refugees fleeing disaster, and they deserve compassion and support, not isolation and exclusion."