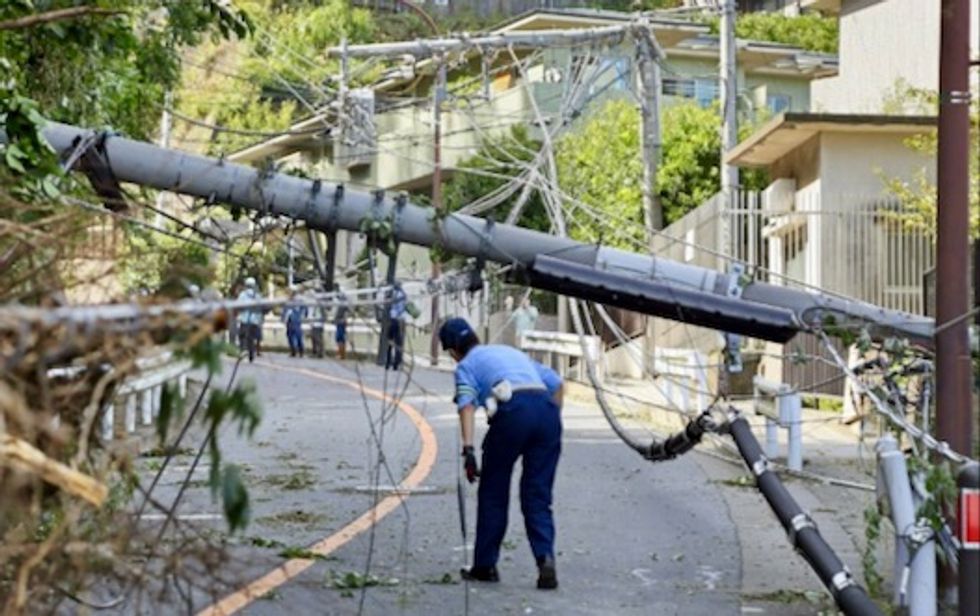 Typhoon Faxai, packing winds of up to 207 kilometres (129 miles) per hour, made landfall in Chiba just east of the capital before dawn, after barrelling through Tokyo Bay.

The transport disruptions unleashed by the storm came less than two weeks before the start of the Rugby World Cup, and delayed the arrival of the Australian team -- a reminder that Japan's typhoon season could present challenges for organisers.

Police confirmed two people were killed in the storm -- a woman in her fifties who was found dead in Tokyo and an elderly man in the neighbouring Chiba prefecture.

Security camera footage showed that high winds pushed her across a street and into a wall, while the 87-year-old man was found dead in the woods under a fallen tree.

The storm injured more than 30 people, including a woman who sustained serious injuries after gusts toppled a protective netting structure at a golf driving range onto nearby houses.

Non-compulsory evacuation orders were issued to hundreds of thousands and authorities said more than 2,000 people had taken refuge in shelters at one point.

The strong winds downed trees and power lines. Nearly 760,000 households were still without electricity in the Tokyo area Monday evening.

Scaffolding was ripped from buildings and protective sheeting hung to keep construction debris off the streets was crumpled and torn by the storm.

While the damage was relatively light given the wind speeds, it was enough to cause chaos in the capital's notoriously busy morning commute.

The overland East Japan Railway train system was largely halted in the early hours of operation while tracks were checked for fallen trees and other debris.

The storm also caused delays and stoppages on subway lines, leading to massive crowds at some stations in the busy metropolitan area that is home to 36 million people.

Bullet train services that were suspended during the storm had largely resumed, though some were operating on a reduced schedule. Some roads were blocked by downed trees.

And trains running to and from Narita International Airport were halted, with buses and taxis the only options left to those arriving or hoping to fly out.

Thousands of people were stranded at the airport Monday evening, with officials preparing to distribute blankets and food.

At least 138 domestic flights were cancelled, with the weather even delaying the arrival of the Wallabies in Tokyo on Monday ahead of the World Cup that kicks off on September 20.

The French team managed to sneak in just ahead of the typhoon and reach their training camp near Mount Fuji.

By mid-Monday morning, the storm had moved back offshore and was headed northeast away from Japan, back into the Pacific.

The weather agency warned that landslides were still possible in Chiba as well as the northern Fukushima region as the storm headed away from land.

Japan is used to severe tropical storms and typhoons during late summer and autumn.

AFP / Charly TRIBALLEAU Typhoon Faxai made landfall in Chiba just east of the capital before dawn, after barrelling through Tokyo Bay

But this year, the typhoon season coincides with the Rugby World Cup, presenting a possible headache for teams and organizers.

Tournament rules say that if a pool match has to be scrapped due to extreme weather, it is classed as a draw, which could have a major impact on what is set to be a very close competition.

Nicholas van Santen, a spokesman for Rugby World Cup organizers, said they were working closely with the teams to minimize any disruption to their training schedules.

"In the days and hours leading up to the typhoon making landfall, the organizing committee monitored the situation closely with the tournament's weather information provider and the relevant authorities," said Van Santen.