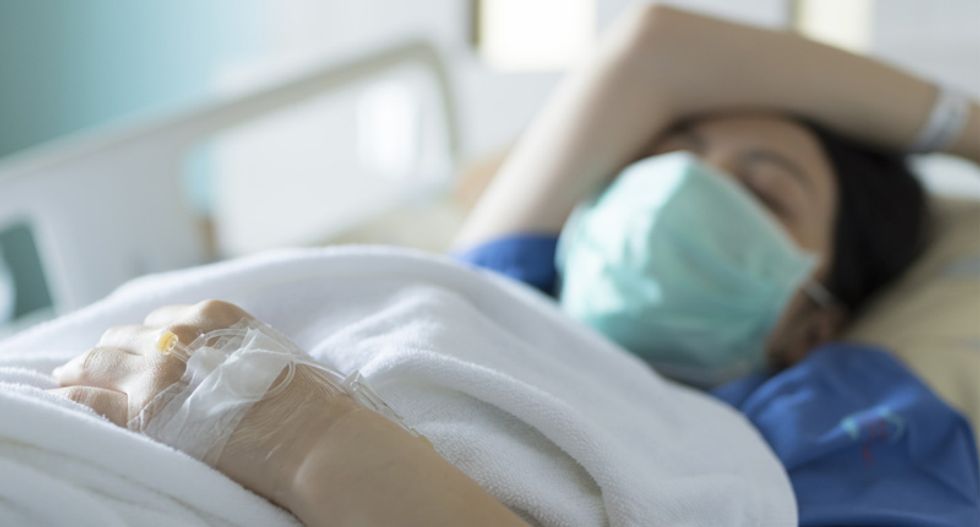 Among many recent troubling headlines was this one: “Families Go Deep in Debt to Stay in the Middle Class.” That story came on the heels of a report that consumer debt in the United States hit $14 trillion in the first quarter of the year, a level not seen since just before the financial crash of 2008.

To understand how we got here, it’s important to note another finding we feel has been perhaps most damaging to America’s middle class: since 1990, health care costs have risen 276 percent as wages, when adjusting for inflation, have barely grown at all.

“Health care is gobbling up your wages,” Axios recently reported, highlighting the fact that as of 2017, nearly one-third of income in the average American household is consumed by spending on health insurance. That’s more than double what insurance cost families in 1999.

Our employer-based health insurance system has created a vicious cycle for working American families and the businesses that employ them. With the cost of prescription drugs and treatment at hospitals rising, insurance companies have not pushed back to lower costs. They have instead passed cost increases onto companies that provide health insurance to their workers. That has forced companies to freeze and even lower employee wages to continue providing health insurance.

Workers, in turn, have not had their wages grow fast enough to keep up with higher costs for housing, transportation, education and yes, out-of-pocket health care costs. That has forced middle-class families to take out record amounts of high-interest credit card debt and unsecured personal loans to pay the bills.

Think of it this way: The cost to attend college, buy a car, take out a mortgage and get needed medical care are all much higher today than 30 years ago. But because tens of millions of Americans receive health insurance through their employer, high health care costs have prevented millions of American families from seeing larger paychecks. That is not true for any other major expense. The money employers otherwise would have given their workers in raises is going instead to health insurance companies.

That positions America’s health insurance companies as a unique threat to the financial well-being of the middle class. As CEOs, we see this exploitation of the American middle class and businesses up close.

In Easton, Pennsylvania, MCS Industries employs more than 150 workers as it generates hundreds of millions of dollars in revenue and leads North America in the supply of mirrors, picture frames and wall decor. We used to make those products in the United States, but we were forced to move those manufacturing jobs to China and Mexico. Ever-rising health insurance costs are a reason we have to move jobs overseas. And those uniquely American costs are preventing us from bringing jobs back to Pennsylvania. In 2000, health insurance costs were 7 percent of payroll at MCS. They are now 22 percent of payroll. If we could eliminate the profit margin and administrative waste of health insurers, we could bring jobs back to this country and increase workers’ pay.

In California, entrepreneurs are constantly pitching investors on the company they believe will be the next Google or Uber. But health insurance is often a hurdle for innovators. It’s difficult to leave a job with health insurance to launch a new company when you could go months or years without health benefits. And for established start-ups, providing health insurance to employees is at the center of a fight between gig companies like Lyft and Uber and the state of California. Drivers are finding health insurance increasingly unaffordable, while gig economy companies are struggling to provide insurance to employees who come and go and work between a few hours a month and 40-plus hours a week. The United States is unique among rich countries in tethering access to health care to the workplace. If we could follow the lead of those other countries, these problems would go away.

At the center of this problem are America’s health insurance companies. Until we decouple health insurance from employment, employers and workers will continue to bear the undue burden of outrageously high health care costs. And skyrocketing insurer profits will continue to force middle-class families to run up credit card debt to survive as employers struggle to increase wages.

We need a single, national health care payment system to offer relief to American businesses and workers. By taxing companies and workers fairly, and removing the waste and profiteering from health insurance companies, we can unshackle the middle class and American companies from a cycle of stagnant wage growth and growing debt that threatens our economy.

Joe Sanberg is a co-founder of Business for Medicare for All. He is also the co-founder of Aspiration.com, which empowers customers to match their banking and spending with their values, and the founder of Working Hero Action, which advocates for low-income Americans.

Richard Master is a co-founder of Business for Medicare for All. He is also CEO and chairman of MCS Industries, the leading supplier of mirrors, picture frames and wall decor in North America.

US on edge over video of fatal police beating

Memphis (AFP) - The southern US city of Memphis braced itself for unrest Friday as authorities prepared to release a video depicting the fatal assault of a Black man by five police officers who, the victim's mother said, "beat him to a pulp."

The police officers, who are also Black, were charged with second-degree murder in the beating of 29-year-old Tyre Nichols, who died in hospital on January 10, three days after being stopped on suspicion of reckless driving.