UK's Johnson rallies party with vow to 'get Brexit done' 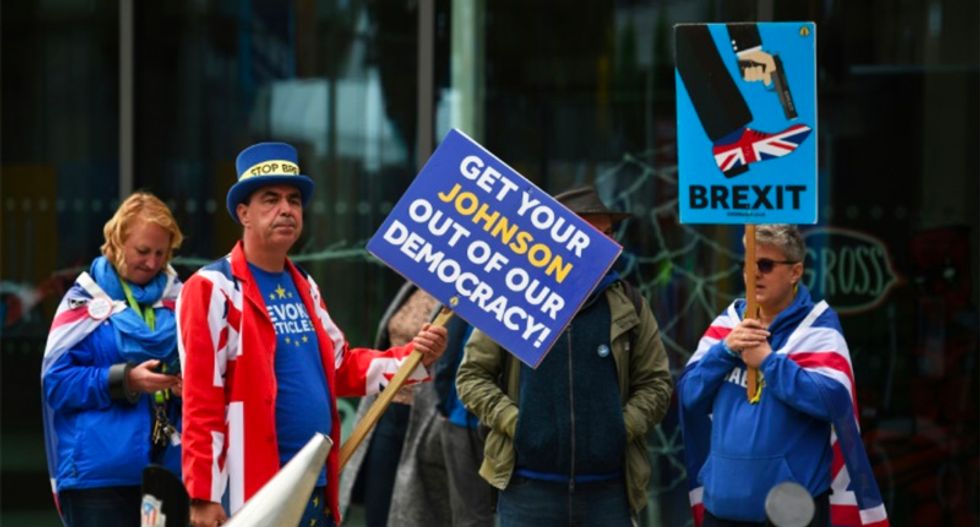 Embattled British Prime Minister Boris Johnson gathered his Conservative party Sunday for what could be its final conference before an election, promising to "get Brexit done".

Despite a string of parliamentary setbacks and a defeat in the Supreme Court, Johnson insists he will take Britain out of the European Union next month, with or without a deal with Brussels.

"What we need to do is to move on. And the way to do that is to get Brexit done on October 31," he told BBC television in Manchester, northwest England, where the conference is taking place.

His tough stance has put him at odds with the House of Commons, which has passed a law blocking a "no deal" exit, and lost him a number of his own MPs.

But it resonates with the overwhelmingly pro-Brexit Conservative party members who elected him in July -- and are expected to give him a hero's welcome.

The conference "will be a rally for Boris Johnson and a rally for Brexit", predicted Tim Bale, professor of politics at Queen Mary University of London.

Even as it started, however, Johnson faced new questions about his relationship with a US businesswoman who won public grants.

The four-day conference also risks being disrupted by parliamentary business in London.

Opposition MPs were furious at Johnson's decision to suspend parliament for five weeks in early September -- a move the Supreme Court quashed on Tuesday -- and refused to agree to the normal conference recess.

Opposition parties are threatening manoeuvres, perhaps even a confidence vote, that could force ministers to race back to parliament.

But in what will be seen as a snub to MPs, Johnson will deliver his closing speech as planned on Wednesday, when he should be answering questions in the Commons.

The PM has had a turbulent two months in office, having suffered seven successive defeats in the Commons -- in the process losing his majority.

He expelled 21 Conservative MPs when they backed a law requiring him to ask EU leaders to delay Brexit if he cannot get a divorce deal by a Brussels summit on October 17-18.

After the Supreme Court ruled his suspension of parliament unlawful, Johnson challenged opposition parties to bring down his government.

But the Labour party said it will do nothing to bring about an election until a "no deal" Brexit is no longer possible.

Johnson has responded with defiance and focused his ire on MPs, accusing them of "surrendering" to the EU and trying to undermine the 2016 referendum vote to leave.

His rhetoric drew accusations of stoking division, but he insisted Sunday he had been a "model of restraint".

While condemning rising numbers of attacks on MPs, he accused his rivals of trying to obscure their motives in a "great cloud of indignation".

The tough talk pitching him against parliament appears to be winning over pro-Brexit voters.

Two surveys this week, by YouGov and Opinium, put the Conservatives 11 and 12 points ahead of the Labour main opposition.

"What he's trying to do is maximise support among Leave voters," Chris Curtis, a political research manager at YouGov, told AFP.

Poll numbers matter because, with parliament deadlocked, most commentators expect an election in the next few months.

But Johnson must overcome a key hurdle before then.

The law passed by MPs means he can only deliver Brexit on October 31 if he gets a divorce deal.

But few in Brussels are optimistic and the latest round of talks ended on Friday without a breakthrough.

Constantine Fraser, an analyst on European politics at investment service TS Lombard, said Johnson's team were running out of options.

"Their response is going to be to come out fighting," he told AFP.

In a further headache for Johnson, a police watchdog is looking into whether he should face investigation over his links to a US tech entrepreneur.

The Sunday Times newspaper alleged he was having an affair with former model Jennifer Arcuri while he was London mayor.

It claims he failed to declare a series of potential conflicts of interest over benefits provided to her business.

The premier insisted on Sunday: "Everything was done with full propriety."