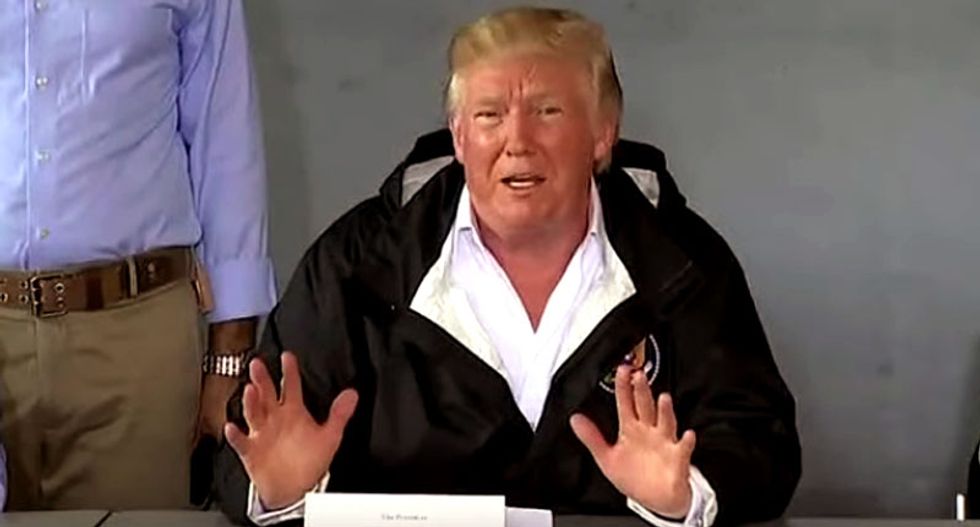 President Donald Trump has been fixated all week on his false claim made Sunday that Alabama “will most likely be hit (much) harder than anticipated” by Hurricane Dorian, a statement which wasn’t supported by the evidence at the time. Through a whirlwind of lies, distortions, and even potentially criminal forgeries, Trump has tried to beat back the criticism he received for the gaffe, a campaign that peaked Friday when the National Oceanic and Atmospheric Administration criticized a Birmingham branch of the agency for a tweet that contradicted the president.

Shortly after Trump tweeted falsely about Alabama on Sunday, the National Weather Service (a branch of NOAA) in Birmingham tweeted:

There are several things to note about this new development. First, it comes on the heels of Trump apparently forcing a Homeland Security official to come to his defense, even though his claims didn’t support the president’s initial or subsequent falsehoods. Second, this new statement is particularly dubious given that no administration official was willing to put their name on it. Third, it doesn’t address Trump’s myriad false claims about Hurricane Dorian, including his first claim on Sunday which created a completely false impression about the risks Alabama faced.

Now, as I have noted multiple times, there were a few indications around the time of Trump’s false claim that a relatively small portion of Alabama had a small chance of experiencing strong winds because of the hurricane. (Trump has also shifted ground on what claim he is defending because on Thursday, he asserted that his belief had been that “Alabama may also be grazed or hit” by the storm. He had previously said there had been a “95 percent” chance of the storm hitting the state.) One projection said there was a 5 percent chance of a tiny part of the state feeling 39+ mph winds.

So it’s possible that the NWS tweet somewhat overstated the confidence that there would not be “any” impacts in Alabama, though many dispute the idea that there was anything wrong with the statement. Nevertheless, Trump’s claim was still unequivocally wrong, which he hasn’t admitted; he said that the chances the state would get hit hard had dramatically increased when they were diminishing down to zero. In fact, state officials were so unconcerned about the impact of the storm on Sunday that Alabama’s governor wasn’t on a conference call at FEMA, as the Washington Post reported:

During a briefing at FEMA headquarters on Sunday afternoon, Trump acknowledged governors who had dialed in from Florida, Georgia, South Carolina and North Carolina. He then turned to a state that wasn’t represented on the line.

“It may get a little piece of a great place: It’s called Alabama,” Trump said. “And Alabama could even be in for at least some very strong winds and something more than that, it could be. This just came up, unfortunately. It’s the size of the storm that we’re talking about. So, for Alabama, just please be careful also.”

Since his initial false prediction, Trump has made repeated false claims in his defense and is apparently pressuring government officials to back him up. Instead, he could have admitted he made a mistake or, alternatively, just let the matter drop. The fact that he can’t, and that he’s using the administration to serve his misguided impulses, is deeply disturbing. Many observers continued to express concern about Trump’s behavior:

Let the record reflect it took the White House one full work week to hurl some poor meteorologist in Birmingham into his or her locker.
— southpaw (@southpaw) 1567805256.0

Those dismissing this issue as unimportant are missing the importance of what happened here: A scientific governmen… https://t.co/pX0Az65Osw
— Philip Bump (@Philip Bump) 1567806967.0

The tweet from NWS Birmingham was spot on and accurate. If they are coming after them, they might as well come afte… https://t.co/COXGkpWFuM
— James Spann (@James Spann) 1567806017.0