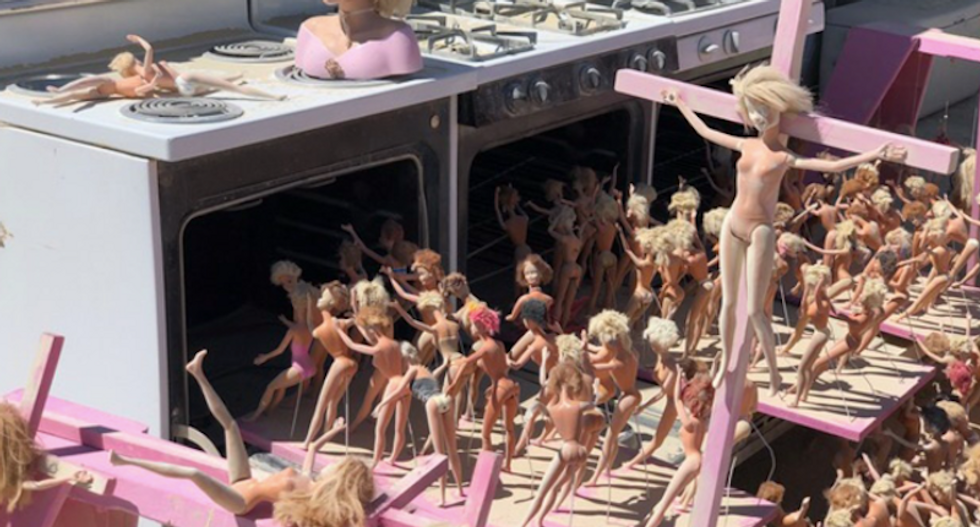 A display at Burning Man, a festival held annually in the Nevada desert, featured a gruesome art display of Barbie dolls in an Auschwitz-like death camp. The display was named “Barbie Death Camp and Wine Bistro,” reports The Jewish News of Northern California.

“We have received a number of complaints,” said Seth Brysk, regional director for the Anti-Defamation League, told the Jewish News. “Certainly individuals have a right to free expression. But using that free expression to trivialize the Holocaust for the sake of political, social or artistic ends is still deeply offensive and inappropriate. And we would ask people not to do so," he added.

The display features Barbies getting crucified and marched by guards. The motto "work sets you free"—the notorious slogan employed at Auschwitz, was also reproduced.

“It tarnishes the memories of those who died, including the 6 million Jews and 5 million others,” Brysk said. “Particularly in the current environment, where we have a confluence of survivors no longer around to tell their stories, and increased extremism and hatred, we think it’s more important than ever to preserve and respect the memory of the Holocaust.”

The camp's creator, who has put on similar displays in the past, doesn't realize why the piece is controversial.

"We certainly don’t want to trigger anybody,” said 65-year-old James Jacoby. “But Burning Man is not a safe space. It’s not Yale University."

A festival-goer explained why he was mad.

“I don’t think I’ve ever seen anything so offensive,” said one Bay Area festival attendee.

On the second to last day of the festival a group of protestors got in an altercation with Jacoby, breaking parts of the display. One of Jacoby's supporters smashed the protestor's taillights with a mallet -- he was arrested and bailed out by Jacoby.

Jacoby stands by the display. "You don’t get to run and hide from something you don’t like. There’s 1,100 theme camps. If you don’t like ours, go to another one.”