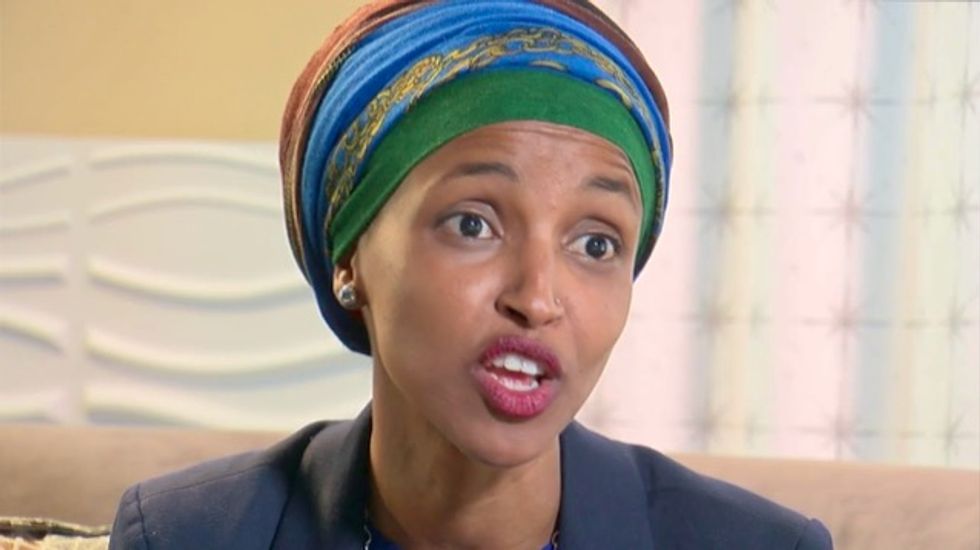 With President Donald Trump firing off menacing tweets and the White House working to blame Iran—on the basis of flimsy evidence—for attacks on Saudi oil facilities over the weekend, Rep. Ilhan Omar said Monday night that Congress must act urgently to prevent Trump from launching another catastrophic military conflict in the Middle East.

Omar pointed to the Trump administration's decision last year to violate the Iran nuclear deal as the source of growing military tensions over the past several months, which on at least one occasion nearly resulted in a full-scale conflict.

"I think we need to make sure that the American people understand that this administration—that lies about weather maps or crowd sizes—cannot be trusted to give us the full information we need to be able to make a decision whether we should be going to war or not with Iran," said Omar. "We are not in a position to think about another endless war and I really hope that my colleagues in Congress are going to pressure this administration to take a step back and figure out how we use diplomacy in de-escalating the situation."

Omar's remarks come a day after Trump tweeted that the U.S. military is "locked and loaded" in response to the attack on Saudi oil facilities, which American and Saudi officials rushed to blame on Iran despite scarce evidence.

As Common Dreams reported, lawmakers and foreign policy analysts accused Trump of taking marching orders from the Saudis after the president said he is "waiting to hear from the kingdom as to who they believe was the cause of this attack, and under what terms we would proceed."

Speaking to reporters in the Oval Office Monday, Trump warned the attack on the Saudi oil facilities "could be met with an attack many, many times larger, very easily, by our country."

In a series of tweets, Rep. Ro Khanna (D-Calif.) said the Trump administration's efforts to blame Iran for the attack in Saudi Arabia "is reminiscent of the Bush administration jumping to conclusions about weapons of mass destruction."

"We can't let another deception lead to war in the Middle East," said Khanna.