WATCH: GOP congressman hides in an elevator as veterans try to confront him about his support for Trump 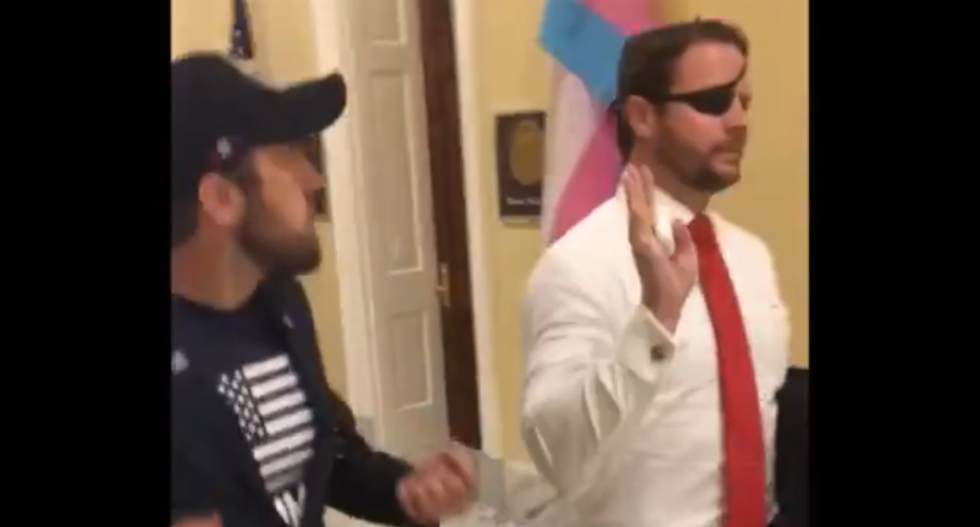 On Thursday, Common Defense, an activist group of combat veterans, followed Rep. Dan Crenshaw (R-TX) through a hallway and demanded to know why he isn't doing something about President Donald Trump's lawless conduct.

Crenshaw — himself a former Navy SEAL — tried to shoo them away, and eventually ducked into an elevator to get away from them.

"How can you let a criminal like Donald Trump run roughshod over our democracy and shred everything that you and I fought for?" demanded one of the protesters on a video uploaded by the group. "Like c'mon man. Like how can you just sit there idly by and not do your duty? We need your leadership right now. You cannot be complicit in this man's crimes. It is immoral. It's laid out clearly in the Mueller report."

"I know you're going to make a video of this," said Crenshaw, trying to wave him away.

"You are not stepping up to the plate," the veteran continued. "We need your leadership."

"As a fellow wounded veteran, how could you let him take us into another war?" cut in a second protester.

"What war is he taking us into?" Crenshaw said dismissively.

"How are you going to let him just cozy up to dictators?" demanded the first veteran. "How are you gonna just let him lock kids in cages? Like c'mon dude!"

"Are you kidding me?" the man continued. "You need to get your courage back, c'mon."

"Courage? You're going to talk to me about courage?" said Crenshaw.

"Yes, we are talking to you about courage," said another protester. "As fellow combat veterans."

"I fought in Iraq. He fought in Afghanistan," said the first protester as Crenshaw came to the elevator bank and ducked inside. "We need you, we are asking you for your leadership, we're not trying to attack you. Read the Mueller report! There are ten impeachable obstruction offenses."