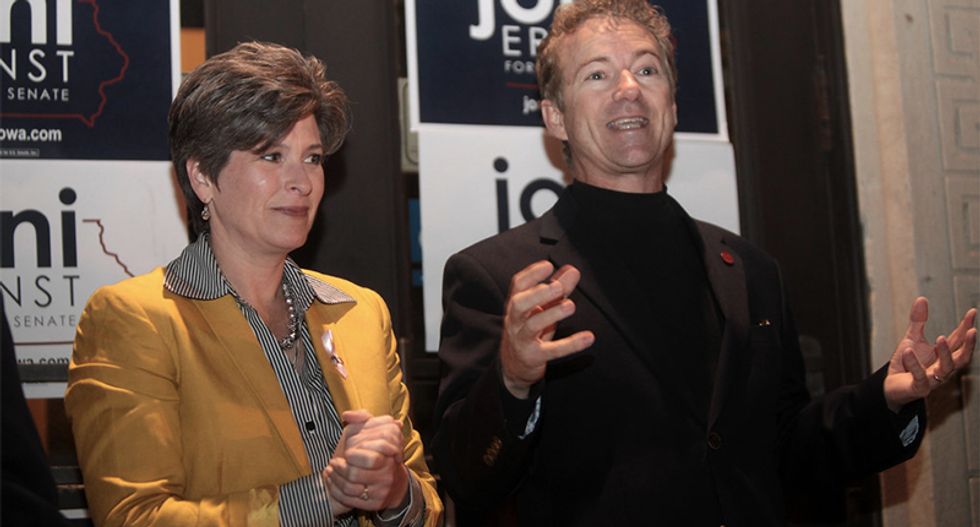 Sen. Joni Ernst (R-IA) is running for reelection at the worst possible moment for her home state. President Donald Trump's trade war has left farmers clamoring for help. Then the president announced that he was giving ethanol waivers to oil companies, defying his ethanol pledge he made in 2016. Most recently, Trump announced that to pay for the tax cuts to the rich, he wants to cut Medicare and Social Security.

According to the Washington Post, Ernst is begging Republicans not to talk about the cuts to Medicare and Social Security in public as she heads into election season. The moment came during a town hall meeting as the senator was in her home state during the August Recess and was captured on video by trackers at the Democratic super PAC American Bridge.

They noted in their tweet of the video that Ernst's ideas of privatizing Social Security or gutting it along with Medicare are "so toxic, she wants to keep it a secret to avoid 'media scrutiny."

"There is a point in time when we as Congress will have to address the situation," she said. "And I think it’s better done sooner rather than later, to make sure that we’ve shored up that system.”

“So it’s, you know, a broader discussion for another day,” she continued. “But I do think, as various parties and members of Congress, we need to sit down behind closed doors so we’re not being scrutinized by this group or the other, and just have an open and honest conversation about what are some of the ideas that we have for maintaining Social Security in the future.”

Democratic opponent Theresa Greenfield attacked the comments, saying that Americans worked hard for their benefits. They "deserve better than a senator who plays games with retirement security.”