WATCH: Woman beat elderly Lyft driver — and police took the handcuffs off and let her go 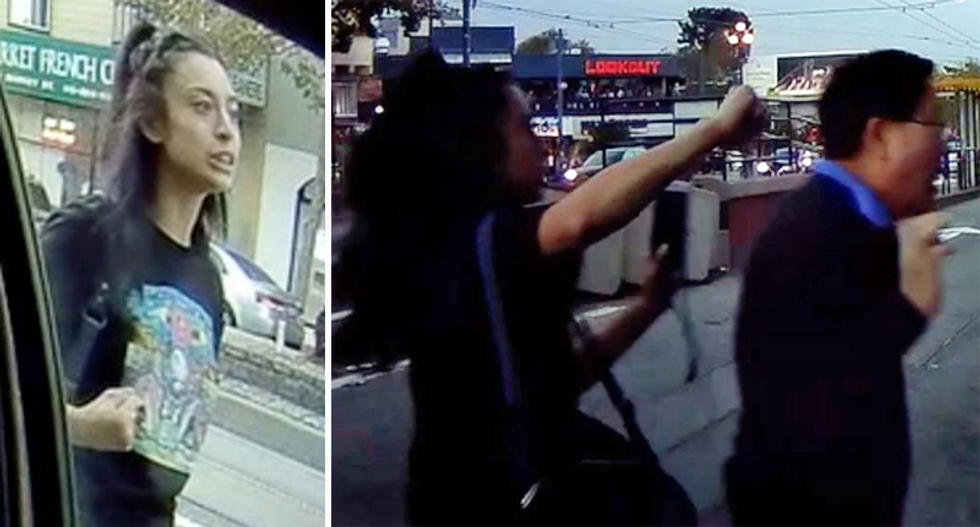 Dashcam footage showing a violent attack on a Lyft driver was posted on social media, Next Shark reported Tuesday.

The footage was reportedly released by the man’s daughter, Ionny Hwang. It shows the attack taking place on Market Street -- the main road downtown San Francisco – at the corner of Noe Street in the Castro District.

“This past Saturday evening, my dad was driving for Lyft in San Francisco, and was punched and assaulted repeatedly by a female passenger. She whacked and beat my dad at least four times. The inside of his lip is bruised deep purple,” Hwang posted on Facebook. “She was released by the police before they understood the situation, and all we have is her first name, Patricia.”

“The police officer came and my dad flagged him down. The officer found the assailant and put her in handcuffs. My dad thought the police were handling the situation, so he went to re-park his car, which was next to a red zone. When he came back, the police officer had LET HER GO. To my knowledge, the officer did not properly ID Patricia; all we have is her first name,” she continued.

She said she was “beyond livid” with the situation.

“My heart breaks every time I watch this video and I am so upset by this entire situation. This could’ve happened to anyone’s parents, this could’ve happened to anybody. This kind of behavior is so ugly and beyond inconsiderate, and should absolutely not be allowed to slide,” she added. “I’m not going to give up until she faces consequences for her actions of what she did to my dad.”

PLEASE HELP ME BY SHARING THIS POST ON YOUR STORY— The things we see or hear about on social media can be unnerving, but you never expect it to happen to you or your family. I’m beyond LIVID with this situation involving my dad. This past Saturday evening, my dad was driving for Lyft in San Francisco, and was punched and assaulted repeatedly by a female passenger. She whacked and beat my dad at least four times. The inside of his lip is bruised deep purple. Not once did he do anything but shield himself; he didn’t know that the situation was caught on his dash-cam, and thought she would accuse him if he tried to defend himself. She was released by the police before they understood the situation, and all we have is her first name, Patricia. #lyft #sf #norcal #bayarea #assault #attack