'What the hell is going on here'?: Alarm raised as Trump's Intelligence Director refuses to give whistleblower complaint to Congress 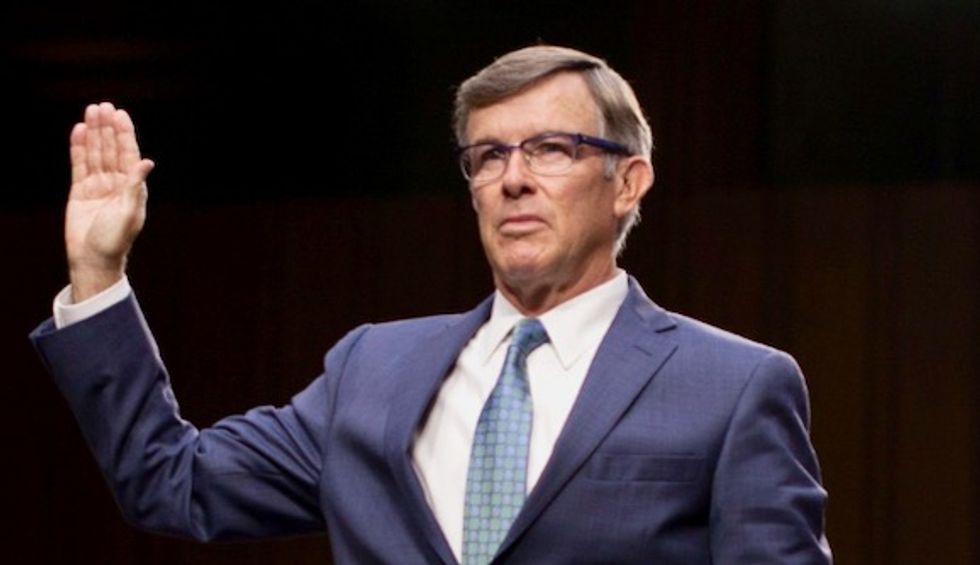 Experts are warning that protocols put in place to protect government whistleblowers have been put in serious jeopardy—potentially at the direction of President Donald Trump, according to a top Democrat—as the acting Director of National Intelligence is refusing, despite legal requirements, to share an official internal complaint with Congress.

After announcing last Friday that the independent Inspector General of the office of the Director of National Intelligence (DNI) had alerted him to a whistleblower complaint, House Intelligence Committee Chairman Adam Schiff (D-Calif.) told Margaret Brennan on CBS's "Face the Nation" Sunday that acting DNI Joseph Maguire was refusing to turn over the complaint because it involved "privileged communications" between people outside the intelligence community.

Maguire also told the chairman that "he is being instructed not to" respond to the committee's subpoena regarding the complaint, Schiff told Brennan.

"This involved a higher authority," the chairman said. "It's a pretty narrow group of people that it could apply to that are both above the DNI in authority and also involve privileged communications. So, I think it's fair to assume this involves either the president or people around him or both."

No Director of National Intelligence has ever refused to turn over a whistleblower complaint the IG determined to b… https://t.co/jonKAJHVjx
— Adam Schiff (@Adam Schiff) 1568571472.0

"Make no mistake," tweeted Washington Post columnist Greg Sargent Wednesday. "The refusal to turn the whistleblower's complaint over to Adam Schiff's committee constitutes another serious erosion in checks on Trump's norm-shredding." At the Post, Sargent wrote that an order from the White House to Maguire to ignore Schiff's subpoena would be similar to other conduct by Trump.

"Trump's White House, of course, has asserted various forms of presidential prerogative to block oversight on many fronts, including preventing Judiciary Committee Democrats from questioning multiple direct witnesses to Trump's extensive corruption and wrongdoing, as documented by the special counsel," wrote Sargent.

The developing story, Sargent added, is likely "about to get a whole lot more media scrutiny, because it involves secretive back-channel maneuvering, a possible threat to national security and potential lawbreaking at the highest levels of the Trump administration, possibly at the direction of President Trump himself—all with a whole lot of cloak-and-dagger intrigue thrown in."

The DNI's refusal to forward the whistleblower's complaint to the committee represents "an ominous new turn," he wrote, "one that should only underscore concerns that serious—and dangerous—lawbreaking might be unfolding."

On social media, Trevor Timm, executive director of the Freedom of the Press Foundation, wrote that the news of high-level flouting of laws served to affirm the importance of whistleblowers and helps demonstrate how difficult it can be for them to operate within the government.

Required reading for the handful of people who still think @Snowden should have gone through "the proper channels" https://t.co/d8p6FqEZ3C
— Trevor Timm (@Trevor Timm) 1568769350.0

In accordance with systems meant to insulate whistleblowers from possible retaliation from agency heads, the Inspector General received the complaint on August 12 and assessed it as "credible"—a determination which by law requires the DNI to turn the complaint over to congressional intelligence committees.

The whistleblower's disclosure described (pdf) "a serious or flagrant problem, abuse, violation of law or executive order, or deficiency" regarding national intelligence, according to the alert Schiff received from the Inspector General, which did not include further details.

"Under the statute as written, the Director of National Intelligence doesn't have the discretion to not act or get a second opinion," Margaret Taylor, senior editor of the Lawfare Blog, told the Post. "He just has to forward it to the intelligence committees."

As Daniel Drezner, a professor of international affairs at Tufts University, put it on Twitter: "I really want to know what the hell is going on here."