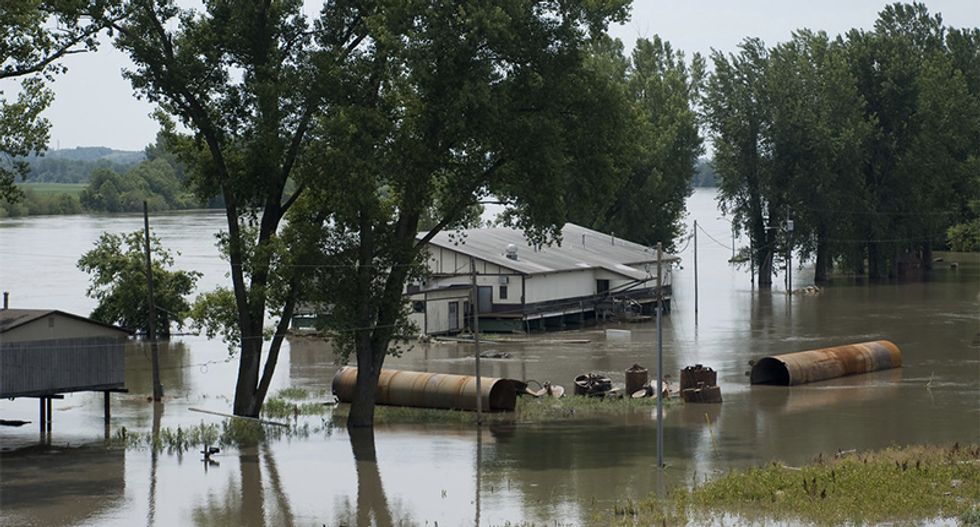 A neighborhood in Rulo, Neb., is flooded by the Missouri River in June 2011. (Photo By Diana Fredlund, US Army Corps of Engineers.)

Cities across the United States are already seeing the impacts of climate change. Sea levels are on the rise in Miami, Florida, where ocean waters creep into the streets, even when it isn't raining. Massive wildfires have taken out whole neighborhoods in California and in Alaska, about 2.5 million acres have burned since July 3. Wildfires there are getting worse, according to experts.

The problem of climate change has reached a dangerous level for some homeowners in areas that are no longer insurable. In Miami, for example, the "street-level" is now considered the basement and insurers are dropping coverage for basements. According to the Daily Beast, at least 340,000 California homeowners lost their property insurance coverage between 2015 and 2018 because the wildfires are getting worse and companies don't want to pay out when homes are destroyed.

“I see no end to the challenges for insurance when it comes to climate change,” said Professor Jason Thistlethwaite, an environmental and economics expert at the University of Waterloo. “Flooding is another area where you’re going to see a lack of availability and affordability.”

Kansas City has been dealing with flooding problems for the past three years. Not only does it make roads dangerous, impair infrastructure, and create unsafe drinking water, but it also costs homeowners.

“Many families do not have savings to repair a severely damaged home and for some, taking on debt can be burdensome or not feasible,” said Dr. Carolyn Kousky, executive director at the Wharton Risk Management and Decision Processes Center at the University of Pennsylvania. “There is really no substitute for insurance for having the needed funds quickly post-disaster to begin recovery. Unfortunately, often those who need the coverage the most are the least likely to be able to afford it.”

For Americans in potential disaster zones, relocating could mean losing everything. If an insurance company refuses to insure a property, it won't sell. It could ultimately leave owners with a property underwater in more ways that one.

Read the full report at The Daily Bast.