'WTF is he wearing?' Sean Spicer viciously mocked after 'Dancing with the Stars' salsa debut 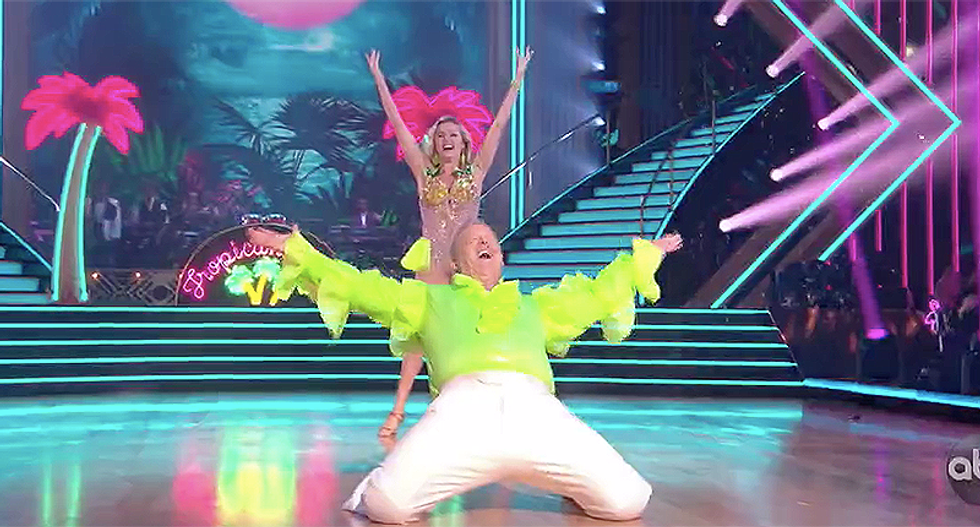 The new season of Dancing with the Stars" introduced an eager and smiling Sean Spicer during it's Monday season opener. The former spokesperson for President Donald Trump came out on stage with a neon green ruffled shirt tucked into white pants. He appeared to pump his fists in the air as he took the stage.

When it was Spicer's turn to dance, he managed to perform far better than his lies in the White House briefing room. After so much experience tap-dancing around issues, it was assumed Spicer would do well, but like many political leaders, he struggled to find the rhythm.

“You were off-beat most of the dance,” one judge explained. “But you had fun!”

Ironically, he danced the Salsa along to Spice Girls' "Spice Up Your Life."

“What were you doing there?” asked of the judges when Spicer had finished his dance. “It's like you were being attacked by a swarm of wasps.”

Luckily for Spicer, however, the judge found it “strangely entertaining.” The comment is remarkably similar to the way freakshows were described.

Spicer ultimately ended up with a score of 12 out of 30, beating Lamar Odom, who scored an 11.

You can see the comments from the web below:

I get the instinct to make fun of Sean Spicer for looking ridiculous on DWTS, but that’s the whole reason he’s goin… https://t.co/la5YmEmXQ2
— Jamison Foser (@Jamison Foser) 1568680311.0

Sean Spicer: “Going from being a spokesperson for a clown, to being an actual clown is a fairly seamless transition… https://t.co/Lk1tbCovPi
— Mrs. Betty Bowers (@Mrs. Betty Bowers) 1568679490.0

We can’t wait to see how flexible Sean Spicer is on Dancing with the Stars since he had his spine removed years ago. #DWTS
— Full Frontal (@Full Frontal) 1568678401.0

Remember when everyone was freaking out about Spicer’s suit being too big and necktie too askew? https://t.co/VmsIOuw6rs
— Dave Levinthal (@Dave Levinthal) 1568680725.0

sean spicer can and should eat a bag of dog shit. fuck whomstever decided to put his ass on TV again
— collin duddy (@collin duddy) 1568683185.0

Sean Spicer owes Melissa McCarthy immense gratitude. The only reason he’s a “star” is cus she made his absurd antics funny.
— Peter Fox (@Peter Fox) 1568683192.0