‘You need to go’: White woman screaming about abortion gets pulled away by cops for heckling black speaker 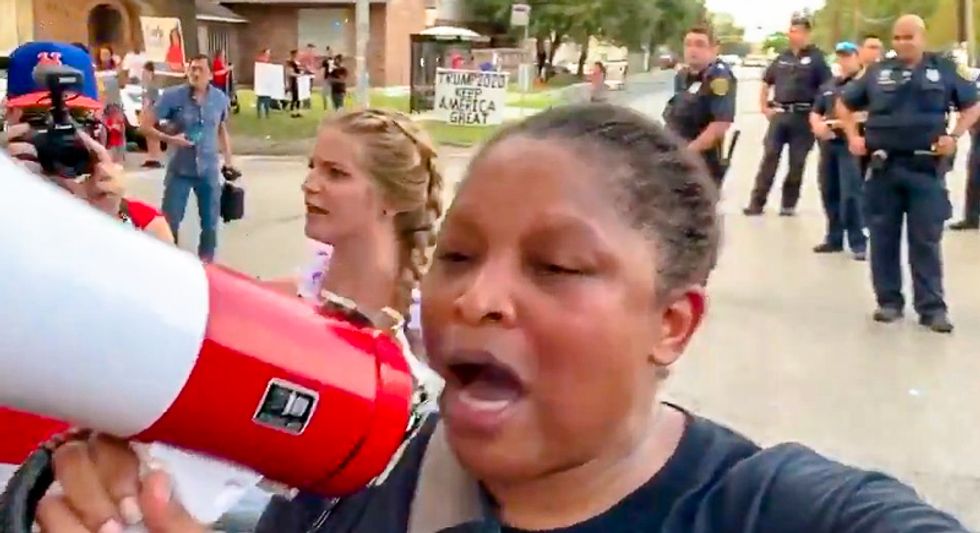 Conservative activist Kaitlin Bennett was escorted away by police after she tried to interrupt a liberal speaker.

The incident, which was caught on video, appeared to take place in Houston prior to last week's Democratic presidential debate. The video was later posted online by The Blaze's Elijah Schaffer, who was sympathetic to the right-wing heckler.

The video shows a speaker, who is black, talking about systemic racism.

"They have found ways to cage our babies, separate families, mistreat and abuse us," the woman says before she was interrupted by Bennett.

"What about abortion?" Bennett exclaims.

"A black woman is speaking," the crowd informs Bennett, who is white. "The queen is speaking."

"You need to go," one person warns.

As the conservative activist begins arguing with onlookers, Houston police approach and pull her away. The officers appear to inform Bennett that she must stay in the area designated for her group.

"I want everybody to take a look over here," the speaker announces, pointing out Bennett. "This is what happens."

"F*ck the white girl," someone in the crowd shouts.

"Get your ass the f*ck on," another person says.

Bennett later shared the video with her Twitter followers as badge of honor.

Protestors called .@KaitMarieox a racist, tried to shut her down, & yelled obscenities at her for challenging a wom… https://t.co/5yqqikP9Nb
— ELIJAH SCHAFFER (@ELIJAH SCHAFFER) 1568341745.0