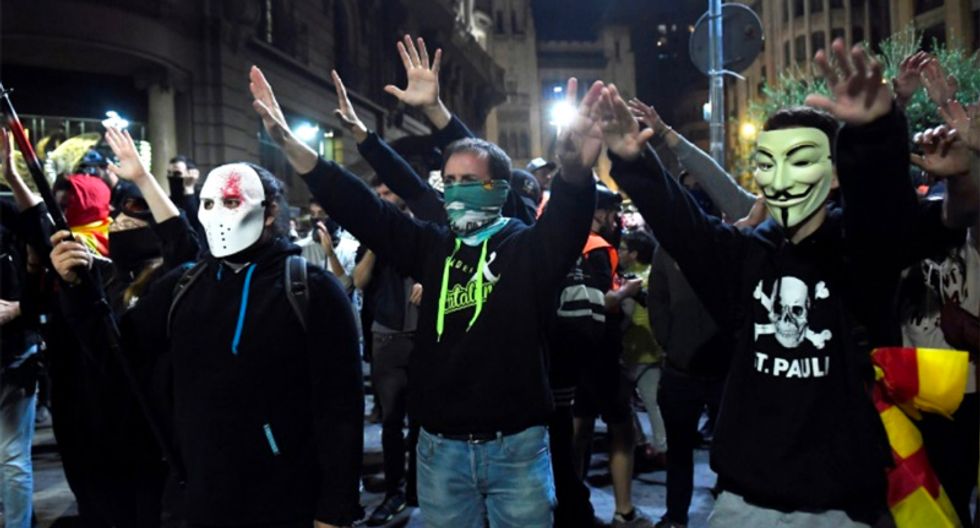 Around 350,000 people rallied in downtown Barcelona on Saturday, turning the streets into a sea of independence flags in the latest mass protest against Spain's jailing of nine separatist leaders.

The turnout figure was given by the local police as vast crowds packed into a wide avenue running between the waterfront and the city's towering Sagrada Familia basilica, which was closed to visitors.

But as night fell, thousands joined a separate demonstration called by the radical CDR, massing along Via Laeitana outside police headquarters, whose windows were shuttered and the main entrance sealed off with plastic sheeting.

AFP / LLUIS GENE Police said some 350,000 people had turned out for the march which took place in the shadow of the Sagrada Familia basilica

Shouting: "Occupation forces, out!" and "The Spanish flag, out!" they hurled hundreds of multicolour plastic balls and marbles at the riot police guarding the building, who did not respond despite the rising tension.

Catalonia has been gripped by unrest since the October 14 Supreme Court verdict which unleashed a wave of protest that quickly turned violent, with masked demonstrators clashing nightly with riot police.

More than 600 people have been injured in the protests, 367 of them civilians and 289 police, official figures show.

The crisis began two years ago when the region staged a banned referendum on October 1 that was marred by police violence, then issued a short-lived declaration of independence, trigging Spain's worst political crisis in decades.

Saturday's main rally was called by the ANC and Omnium Cultural, the region's two biggest grassroots pro-independence groups that have organised some of the largest separatist protests in recent years.

Marching down the spacious boulevard, demonstrators chanted "October 1, we won't forgive, we won't forget", breaking into loud boos and whistling as a police helicopter flew overhead, an AFP correspondent said.

"I feel really angry," said computer technician Marc, 26, who did not give his surname.

"The violence doesn't sit well with me but it's normal to have a bit of upheaval like we've seen in Chile and Ecuador," he said of a wave of mass protests in Latin America.

"There are different ways of protesting but we have one objective: independence."

But Catalans remain sharply divided over the question of separating from Spain, with polls showing 44 percent in favour and 48.3 percent against.

AFP / Josep LAGO Catalans remain sharply divided over the question of separating from Spain, with 44% in favour but 48.3% against, a recent poll showed

Speaking to reporters at the rally, Catalonia's separatist president Quim Torra said his government was with the people "because it is what they want. We will go as far as they want".

He had earlier pledged to push ahead with the controversial independence drive after meeting 800 local mayors who expressed support for secession.

"The show of unity we've seen this week shows the next step that we all must follow... We must all push ahead and exercise the right to self-determination."

Torra has made repeated appeals for dialogue with the Socialist government of Pedro Sanchez with the aim of securing Madrid's agreement for a referendum on independence, but they have fallen on deaf ears.

"What we will not talk about is the right to self-determination," Carmen Calvo, Sanchez's deputy, told journalists on Saturday.

"If.. the aim is to break up Spain's territorial unity and separate Catalonia from Spain, we simply cannot talk," she said. "Unilaterally breaking the rules of the game is not an option."

On Sunday, Catalans who want to remain part of Spain are planning a massive counter-demonstration to raise the voice of the region's so-called "silent majority".

"Those who oppose independence are a majority," said Fernando Sanchez Costa, head of Catalan Civil Society (SCC), telling AFP the unrest was causing a lot of damage to Catalan society.

Earlier, thousands gathered in Madrid in defence of Spain's unity at a rally organised by the far-right Vox party, which has taken a very tough line on Catalan separatism and wants all regional pro-independence parties banned.

Although the faction only entered parliament in April, polls indicate it might become the third-largest party following the November 10 election.