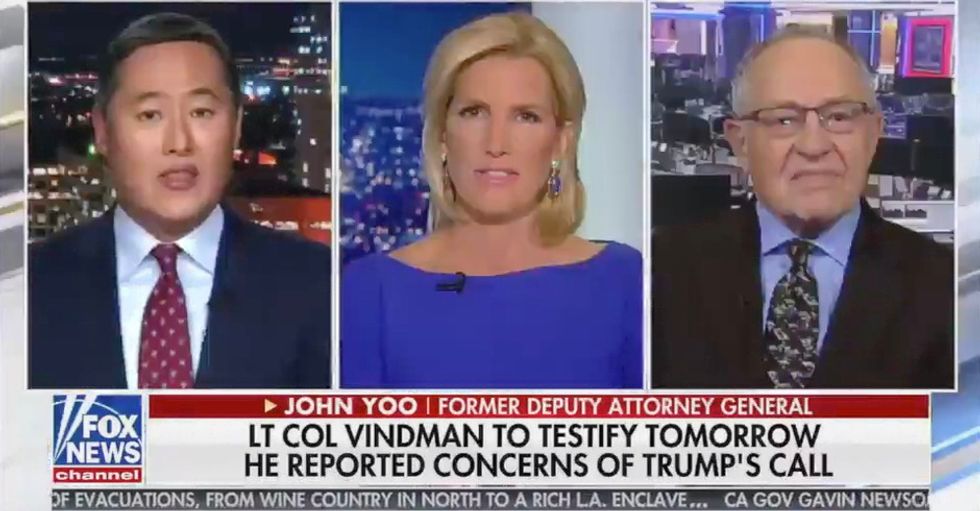 Vindman, who was on Trump’s infamous July 25 call with the president of Ukraine and reported his concerns, is testifying Tuesday before House investigators.

“Here we have a U.S. national security official who is advising Ukraine, while working inside the White House, apparently against the president’s interest, and usually, they spoke in English. Isn’t that kind of an interesting angle on this story?” Ingraham posited.

Yoo Tuesday night called Vindman’s situation “astounding,” and the added, casually, “You know, some people might call that espionage.”

Here’s the clip of Ingraham and Yoo:

Oh my God, look at the spin they are using right now, actually saying that Vindman is a Ukrainian double agent....t… https://t.co/jxsfdvjrPS
— Andrew Lawrence (@Andrew Lawrence)1572315264.0

Many, including experts, are expressing outrage on social media:

Professor of political science and former Ambassador to Russia:

God forbid we should have national security professionals who can communicate with foreign officials in their nativ… https://t.co/8C5wzQZ85F
— Joyce Alene (@Joyce Alene)1572347385.0

They are so desperate, they will say anything, anything, including flailing about to try and tear down this America… https://t.co/SOlA6t4sEJ
— Neal Katyal (@Neal Katyal)1572319442.0

John Yoo, @IngrahamAngle and @AlanDersh have a combined total of ZERO military service. As close any of them ever… https://t.co/8XP0FITLqn
— Moe Davis (@Moe Davis)1572317803.0

This is astonishing. The sheer number of American vets the Trumpists will insult, slander, and mock for the sake of… https://t.co/pyAas8I2VV
— David French (@David French)1572320617.0

When people lack a defense, they become defensive. #LauraIngraham should lose her show for supporting Trumpism over… https://t.co/V6KmhYOyFH
— Maya Wiley (@Maya Wiley)1572351608.0

John Yoo, who narrowly escaped referral to bar authorities for his torture memo, had the audacity to call a purple… https://t.co/nFOk9BFg0F
— Ronald Klain (@Ronald Klain)1572320138.0