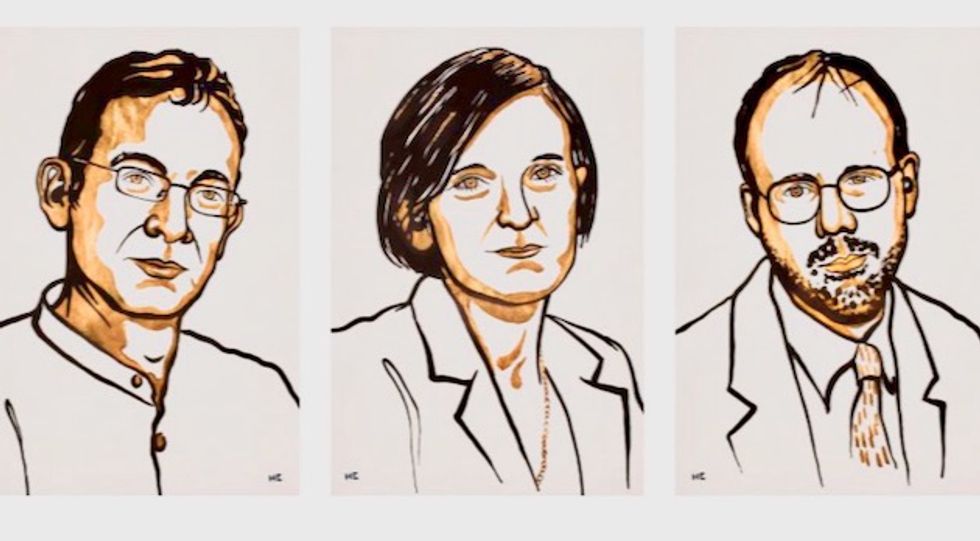 The 2019 Nobel Economics Prize has been awarded to Abhijit Banerjee, Esther Duflo and Michael Kremer. Royal Swedish Academy of Sciences

"This year's Laureates have introduced a new approach to obtaining reliable answers about the best ways to fight global poverty," the academy said in statement.

Banerjee and Duflo are both at Massachusetts Institute of Technology while Kremer is at Harvard University. Duflo is only the second woman to win the economics prize, after Elinor Ostrom got it in 2009, and is also the youngest ever to receive the economics award.

Duflo, who was woken up by Goran Hansson, secretary general of the Royal Swedish Academy of Sciences on Monday, said that getting the prize was "incredibly humbling."

The 9 million Swedish crown ($915,300) economics prize is a later addition to the five awards created in the will of industrialist and dynamite inventor Alfred Nobel, established by the Swedish central bank and first awarded in 1969.

Last week, six Nobel prizes were given – medicine, physics and chemistry plus two literature awards, and the coveted Peace Prize.

US communities are mapping heat islands to boost climate resilience

The phone's home screen shows 90 degrees Fahrenheit (32C) in Silver Spring, a suburb of Washington, on a mid-August day. But the reality is more complex -- in terms of heat exposure, not all parts of the city are equal.

Maria Velez, 53, knows she is lucky to live next to a creek. A stone's throw from her house, other neighborhoods with small apartment buildings are far more built-up and much less green.

Once hated by the left, FBI is now US conservatives' evil demon

Agents of the US Federal Bureau of Investigation are used to criticism, but never in the agency's history have they faced anything like the attacks from conservatives after last week's raid on former president Donald Trump's Florida home.

Over its more than 100-year history, the FBI has been excoriated by southerners committed to racist segregation, by civil libertarians defending political activists and especially by African Americans whose 1960s liberation movement was treated as an acute national threat by the agency.

In a late-night tirade, the former president lashed out against the Fulton County District Attorney's Office just hours after Rudy Giuliani testified before a special grand jury that's probing the Trump campaign's efforts to illegally remain in power despite losing the 2020 election to President Joe Biden.