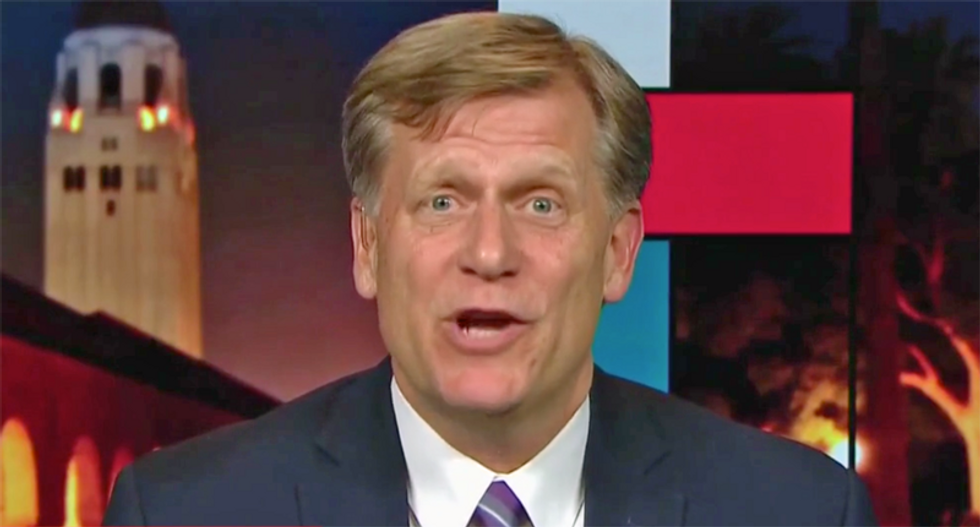 On Thursday's edition of MSNBC's "Deadline: White House," former U.S. Ambassador to Russia Michael McFaul scoffed at the Vice President Mike Pence's denials that he knew nothing about President Donald Trump's apparent plot to extort the Ukrainian government in to digging up dirt on former Vice President Joe Biden.

"What are the chances that the vice president didn't read the notes from the call with the world leader he was flying to meet?" asked anchor Nicolle Wallace.

"Well, I just want to be clear ... I don’t know the facts. But let me speculate," said McFaul. "I used to work at the White House. I used to be on these calls. I used to travel with Vice President Biden when he went to meet leaders, including the Ukrainian leader one time."

"Here is the deal," McFaul continued. "Why was the national security adviser for the vice president on the call in the first place? That is very strange. He’s on the call because they’re about to go meet with Mr. Zelensky. Number two, the transcript is, what, six, seven pages long? It’s a 30-minute call. The flight to Warsaw is eight hours. I find it absolutely impossible to believe that he wouldn’t want to know every single word that the president of the United States said to President Zelensky before meeting with him. It just does not sound credible."

"And number three, why do you think all these people are on this call?" added McFaul. "Why do you think Secretary of State Pompeo is on the call? Secretary Clinton was not on a single call I did in the White House for three years. They are on the call because they are nervous about what the president of the United States is going to say on these calls. And that’s precisely why they would want to know before they meet with Mr. Zelensky. So maybe it’s true, I don’t find it credible."