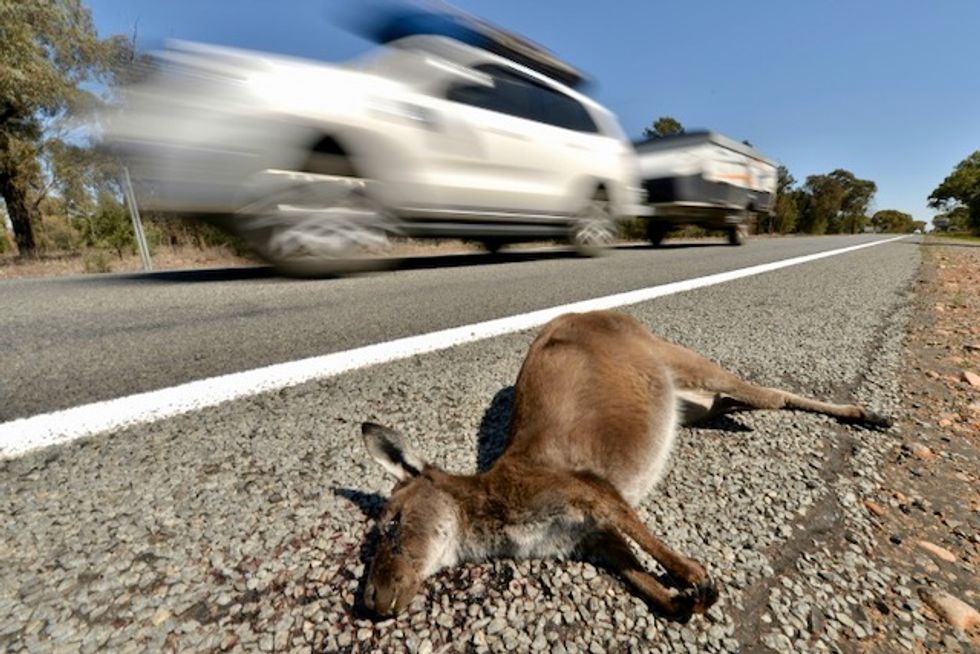 The sight of dead kangaroos by the roadside is not uncommon in New South Wales state, where about 90 percent of car crashes involve collisions with the animals AFP/File / Peter PARKS

An Australian teenager has been charged over the deaths of 20 kangaroos, which he allegedly mowed down with his truck in a killing spree that lasted an hour.

The dead kangaroos, including two joeys, were found littered over roads in Tura Beach, 450 kilometres (280 miles) south of Sydney, on Sunday morning.

At least three other joeys were orphaned as a result of the disturbing attack, according to wildlife rescue group WIRES.

Police said Wednesday the man, 19, had been arrested and charged with animal cruelty offences on Tuesday.

The man allegedly hit and killed the marsupials with his utility vehicle late on Saturday night.

"We take incidents such as these very seriously and anyone who engages in activities such as these will face the full brunt of the law," Bega Valley chief inspector Peter Volf said.

Though the sight of dead kangaroos by the roadside is not uncommon in New South Wales state -- where about 90 percent of car crashes are caused by collisions with the animals -- the scale and allegedly intentional nature of the incident shocked locals.

"It was a very unpleasant sight," resident Rob Evans told the ABC. "Police see an awful lot of things, but you could see that they were shocked as well."

WIRES said the incident came to its attention when police brought a six-month-old orphaned joey to one of its volunteers at 1.30am on Sunday. Two others aged around nine months old were discovered later.

The group said it was "horrified" by the "apparent act of cruelty", with the three surviving joeys now requiring round-the-clock care.

Eastern grey kangaroos usually begin venturing out of their mother's pouch at about nine months of age, but are not fully independent until they reach 18 months.