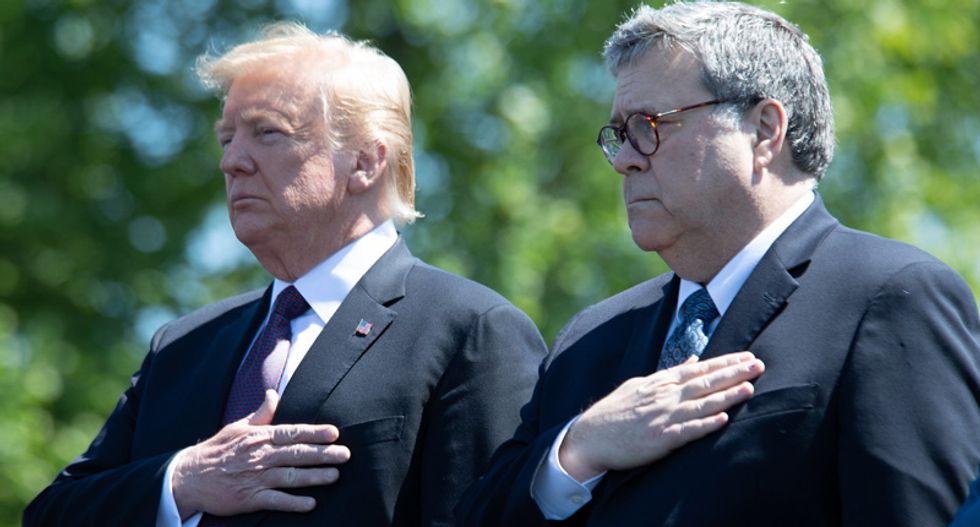 Democrats accused President Donald Trump on Friday of using the US Justice Department as a political tool after it opened a criminal probe into its own handling of the investigation into Russian interference in the 2016 election.

News of the inquiry, which suggested wrongdoing by justice officials in the previous administration of Barack Obama, leaked late Thursday as the White House struggled to push back against a Democratic-led impeachment investigation targeting the Republican president.

The inquiry could further muddy the political waters in Washington, raising questions about the now-ended Russia investigation led by Special Counsel Robert Mueller that saw 34 individuals and three companies indicted, and eight convictions including top members of Trump's 2016 election team.

Trump's Republican allies said the inquiry could shore up the president's longstanding claim that the Mueller investigation was a "witch hunt" based on "fake news".

But Democrats said it was a clear effort by Trump-allied Attorney General Bill Barr to shift attention from the congressional impeachment probe as it accumulates strong evidence that Trump abused his office in pressuring Ukraine to help his 2020 re-election campaign, violating US election law.

The latest inquiry raises "profound new concerns that the Department of Justice under Attorney General William Barr has lost its independence and become a vehicle for President Trump's political revenge," said senior House Democrats Jerry Nadler and Adam Schiff in a statement.

"If the Department of Justice may be used as a tool of political retribution or to help the president with a political narrative for the next election, the rule of law will suffer new and irreparable damage."

"The point of the investigation is to make sure the DoJ and FBI under the Obama administration in 2016 wasn't being used as a tool to influence the elections," said Trump advisor Kellyanne Conway on Fox News.

"Don't we have a right to know if... they were or were not subverting justice and trying to interfere with the elections?" she said.

The Justice Department did not respond to requests for comment.

- Roots of the Russia investigation -

The criminal inquiry has grown out of an initial internal probe led by federal prosecutor John Durham, the US attorney for Connecticut, into the beginnings of the 2016 investigation into whether members of Trump's campaign colluded with Moscow's sweeping effort to influence the election.

US intelligence chiefs, and the nearly two-year Mueller investigation, concluded that Russia, through hacking and social media manipulation, sought to push the election in Trump's favor while damaging his Democratic opponent Hillary Clinton.

Earlier this year Mueller concluded his investigation with a report showing dozens of contacts between the Trump campaign and Russians, and demonstrating that the campaign actively sought dirt on Clinton from Moscow.

Mueller ruled that those activities did not rise to the level of a criminal conspiracy.

Durham is believed to be examining the roots of the probe, which initially focused on campaign advisor George Papadopoulos, who had suspect contacts with Russians.

Durham is also said to be focusing on Trump's national security advisor Michael Flynn, who held secret phone calls with the Russian ambassador to the United States before Trump took office.

Papadopoulos and Flynn pleaded guilty single counts of lying to investigators and admitted their contacts with Russians.

Both, however, are now seeking to reverse their convictions, alleging FBI and Justice Department malfeasance.

Marcy Wheeler, an independent journalist who has studied deeply the Russia investigation, said Durham could be honing in on procedural errors or leaks in the early days of the probe.

"But at least thus far, Durham has spent six months without corroborating the main conspiracy theories about the investigation."

The investigation comes as Trump and his Republican allies in Congress seek to stifle the impeachment probe.

A series of witnesses have supported a whistleblower's allegations that between April and September Trump sought to force Ukraine President Volodymyr Zelensky to open corruption investigations into Trump's possible 2020 rival Joe Biden, and into a debunked conspiracy theory circulated on fringe right-wing websites that Ukraine assisted the Democrats in 2016.

The witnesses have described Trump holding back nearly $400 million in military aid to Ukraine to pressure Zelensky to act, and Democrats say that would support charges of abuse of power by the president.

Democrats are expected to bring articles of impeachment against the president before the end of the year, which would almost certainly be voted through by the Democrat-dominated House.

Trump would then go on trial for removal in the Republican-controlled Senate.