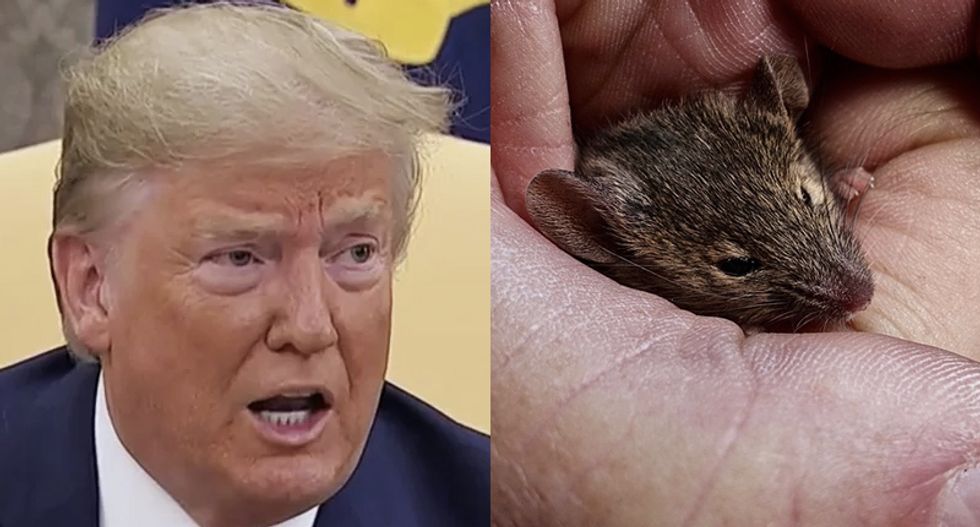 It's been just a few months since President Donald Trump attacked the city of Baltimore for being "a disgusting, rat and rodent infested mess." Tuesday, karma struck as a mouse fell from the ceiling in the White House onto a room full of reporters, who were left scrambling.

In other news: A mouse literally fell out of the ceiling in our White House booth and landed on my lap.
— Peter Alexander (@Peter Alexander)1569940726.0

The most excitement in the White House briefing room in months. Reporters attempt to capture a baby mouse that fell… https://t.co/WM7h1Beh3p
— Shannon Pettypiece (@Shannon Pettypiece)1569941924.0

It was an awkward moment for the president, who has lived in the White House for over two years and done some work on the building. According to previous tweets, however, the rodent problem at the White House dates back to at least July, when visitors and press began spotting rat traps around the building.

Just noting that the White House has had to install multiple “rat stations” around the mansion to counteract the ro… https://t.co/3NWjF8CZpn
— Tim O'Brien (@Tim O'Brien)1564316190.0

It prompted some Baltimore residents to take to the internet to hilariously mock the hypocrisy. You can see theirs and others in the tweets below:

The White House is a rodent-infested dump with mice falling out of the ceiling! I blame slumlord @realDonaldTrump a… https://t.co/UOBAyt0uqf
— Calumet Dundee (@Calumet Dundee)1569948571.0

@realDonaldTrump Says Baltimore is rodent infested. However, why did a mouse fall from the ceiling onto a reporters… https://t.co/HRK1J796LN
— AprilDRyan (@AprilDRyan)1569954887.0

My future grandkids: "Grandpa, tell us about being alive while #TraitorTrump was president." Future me: "A mouse f… https://t.co/zh4pzYqcbP
— Chris Boeskool (@Chris Boeskool)1569950348.0

@PeterAlexander Ate you saying the White House is rodent infested like the "President" said Baltimore was
— Thomas Everett (@Thomas Everett)1569946155.0

@vocemlibertatis There once was a cute little mouse Who lived in the old White House He peered through a hole and s… https://t.co/TSWquhlTmJ
— Laura Bishop (@Laura Bishop)1569950695.0