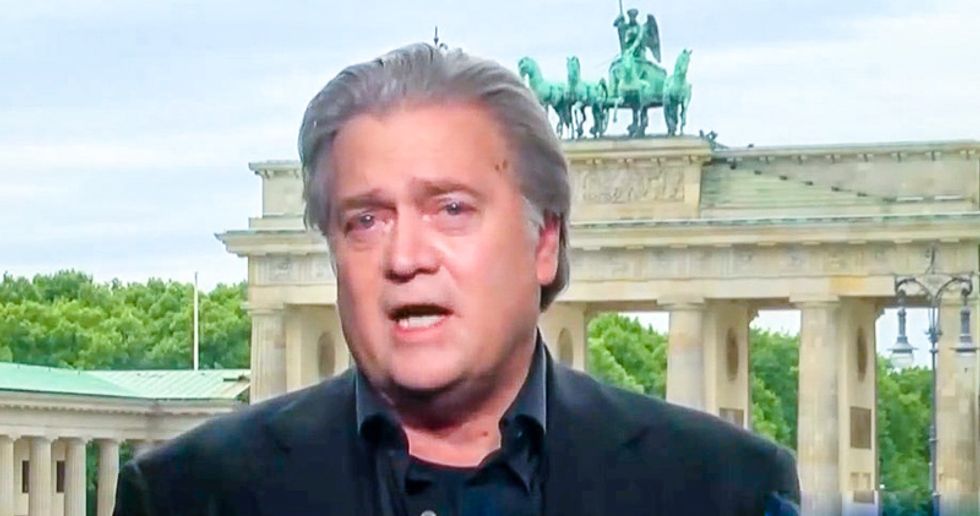 Fresh off of launching an anti-impeachment radio show, Steve Bannon, who has remained loyal to President Donald Trump in spite of being fired from his White House job, offered a preview of how voices in conservative media plan to fight impeachment.

“We’re going to review every witness’ background. We’re going to contest all of the information we’re seeing. We’re just going to sit there and fight these selective leaks that have come out," Bannon told Kilmeade. "Nancy Pelosi is running political warfare.”

Pelosi, in fact, remained vocally opposed to impeachment for most of 2019. The speaker of the House only relented after an intelligence whistleblower came forward, who accused the Trump of soliciting Ukraine to interfere in the 2020 presidential election.

Bannon, the former chief strategist to Trump, fervently defended his past employer in the ongoing impeachment inquiry.

“This is the same thing that Democrats have been doing since Trump won in November of 2016,” Bannon told co-host Brian Kilmeade. “It’s a nullification project trying to delegitimize him and nullify his presidency.”

After falsely claiming that “the Russia thing” was a “hoax” and former special counsel Robert Mueller’s report had exonerated the president, Bannon promoted conspiracy theories which hold that former Vice President Joe Biden’s son, Hunter Biden, had engaged in wrongdoing in Ukraine and been “totally compromised” by supposed business dealings in China. (There is no evidence that either Biden did anything illegal in either Ukraine or China.)

Bannon also described the impeachment inquiry as “illegitimate,” telling Kilmeade that “until they have a full vote of the House, this is a completely illegitimate constitutional process.” He added that it should be fought “all the way up to the Supreme Court."

"We are hurtling toward a constitutional crisis,” Bannon added, referring to the impeachment inquiry as a “farce.”

Elsewhere Monday on president Trump's favorite morning show, co-host Steve Doocy interviewed Isabella Chow, a graduate from the University of California - Berkeley who is featured in the documentary “No Safe Spaces.”

Chow claimed that she had lost many friends and kicked out of school clubs over her decision to abstain from voting on a pro-LGBTQ resolution due to her sincerely-held Christian beliefs.

"I disagreed with the majority of the bill that asked me to affirm an LGBTQ+ identity as good," Chow told Doocy.

Chow concluded her thoughts by calling for “college students and people in regular communities need to be able to accept and to seek for different points of view.”

Matthew Rozsa is a breaking news writer for Salon. He holds an MA in History from Rutgers University-Newark and is ABD in his PhD program in History at Lehigh University. His work has appeared in Mic, Quartz and MSNBC.