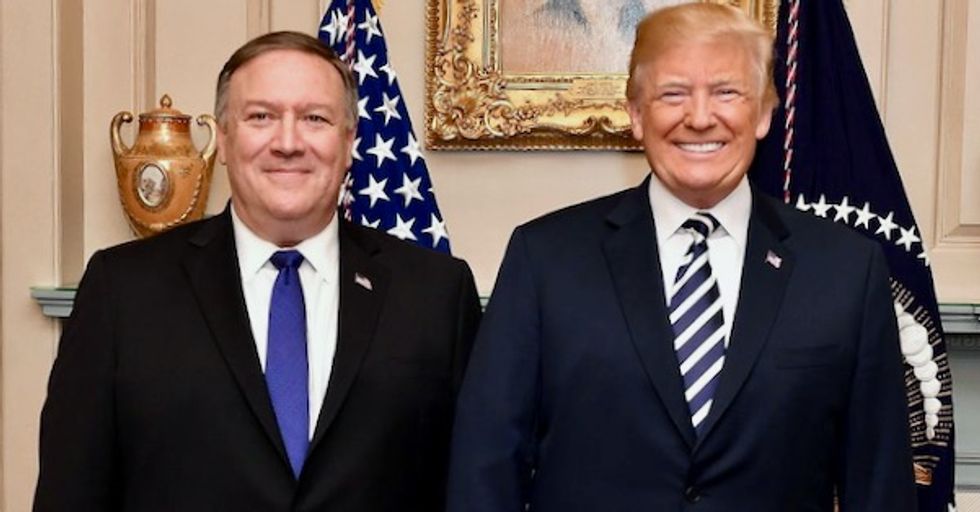 “You are co-conspirator & a traitor to the country. You will resign or be impeached within months.”

U.S. Secretary of State Mike Pompeo is under fire after responding to a letter from the House Foreign Affairs Committee requesting State Dept. officials sit for depositions as they build an impeachment case against his boss, President Donald Trump.

Pompeo, currently in Italy with former Trump White House official, conspiracy theorist (and alleged neo-Nazi) Sebastian Gorka, working to subvert more than a dozen CIA and FBI investigations into President Trump, decided strong-arm the Democrats. Attorney General Bill Barr was there last week on the same mission, and it was not his first time doing so.

The Secretary, despite having no legal standing or basis to do so, banned his officials from being deposed. And he falsely accused Democrats of trying to “intimidate” and “bully” State Dept. officials.

(It’s important to note that Pompeo was among the Republican Congressmen who forced Hillary Clinton to testify before Congress for over 11 hours for their the conspiracy theory-laden Benghazi investigation.)

As The Washington Post reports Tuesday, Pompeo and Barr “are increasingly implicated in the impeachment inquiry.”

Pompeo tweeted out his two-page letter, and was immediately mocked, ridiculed, and berated.

Among those who decided they were not going to take Pompeo’s smug authoritarianism and bullying lying down were Senator Chris Murphy (D-CT), who rightly told the Secretary of State he’s been caught “red handed.”

Listen, you got caught red handed trying to merge the State Department and the President’s re-election campaign. I… https://t.co/hdVZV1BoYy
— Chris Murphy (@Chris Murphy)1569956018.0

You are co-conspirator & a traitor to the country. You will resign or be impeached within months. The people will n… https://t.co/krFbyzjQFp
— David Rothkopf (@David Rothkopf)1569941530.0

Area guy who belatedly remembered he was on a call where crimes were committed says his staffers need time to lawye… https://t.co/dMshdplqIM
— Dr. emptywheel (@Dr. emptywheel)1569940679.0

Pompeo's State Dept was in the news 2 days ago for "investigating the email records of dozens of current & former s… https://t.co/yDBjRs5aQK
— Aaron Rupar (@Aaron Rupar)1569941723.0

The guy who just announced an investigation into 7-year-old work emails says a Congressional inquiry into a Preside… https://t.co/NtZTEwIAq9
— Richard Hine (@Richard Hine)1569942818.0