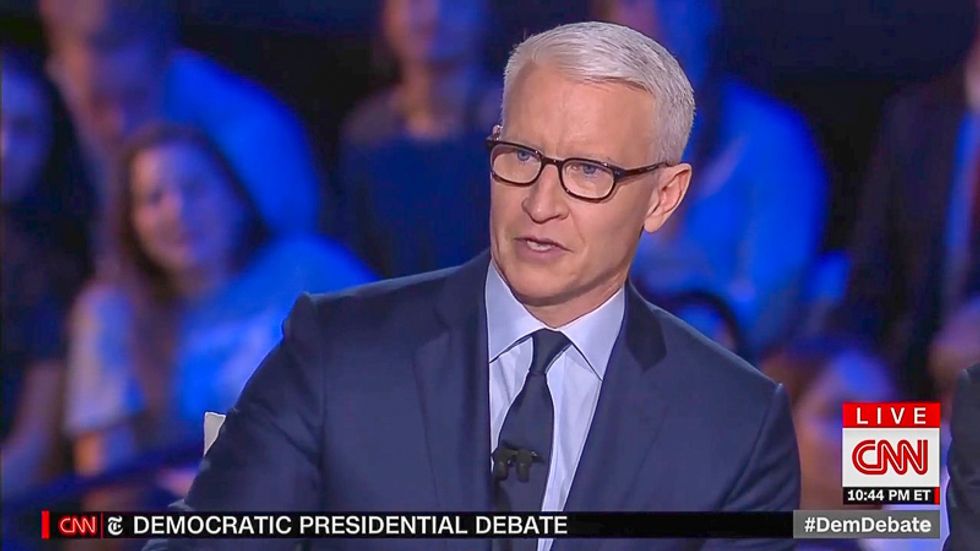 Viewers lambasted CNN on Tuesday for using its time with Democratic presidential candidates to bring up Ellen DeGeneres' friendship with former President George W. Bush, who is considered to be a war criminal by some Democratic voters.

CNN asked about the friendship at Tuesday night's Democratic presidential debate, where moderator Anderson Cooper put the question to the entire field of candidates -- even though no questions had been asked about climate change or China.

Watch the video and read some of the Twitter responses below.

Ohmyfckingod, no questions about climate or China, but Anderson Cooper closes on a question about Ellen DeGeneres a… https://t.co/MD47mbTGDU
— Goldy (@Goldy)1571194007.0

Seriously? No one asked #DemDebate about #netneutrality or #surveillance or any real questions about foreign polic… https://t.co/DbpQeublk1
— Evan Greer (@Evan Greer)1571194008.0

What a great question from @andersoncooper... describe a friendship you’ve had w/ someone who has different beliefs… https://t.co/H0YNNfRMql
— Maria Shriver (@Maria Shriver)1571194331.0

The candidate who answers this ridiculous Ellen question with the Dr. Evil monologue from Austin Powers will win the election #DemDebate
— Gautam Mukunda (@Gautam Mukunda)1571194453.0

Bush is responsible for the death of 1 M Iraqis because he and his cabal lied to the world about WMDs, not someone… https://t.co/DbIA4drqEI
— Jamal Dajani جمال (@Jamal Dajani جمال)1571194429.0

My final tweet about the #DemDebate tonight: Very disappointed #ClimateChange was not mentioned once, but… https://t.co/MWxIRceJTp
— Nick Barnets (@Nick Barnets)1571194892.0

No questions on immigration or climate change... but we did get one referencing Ellen DeGeneres & friendship… https://t.co/61YZcX8sxj
— Sarah Ewall-Wice (@Sarah Ewall-Wice)1571195308.0