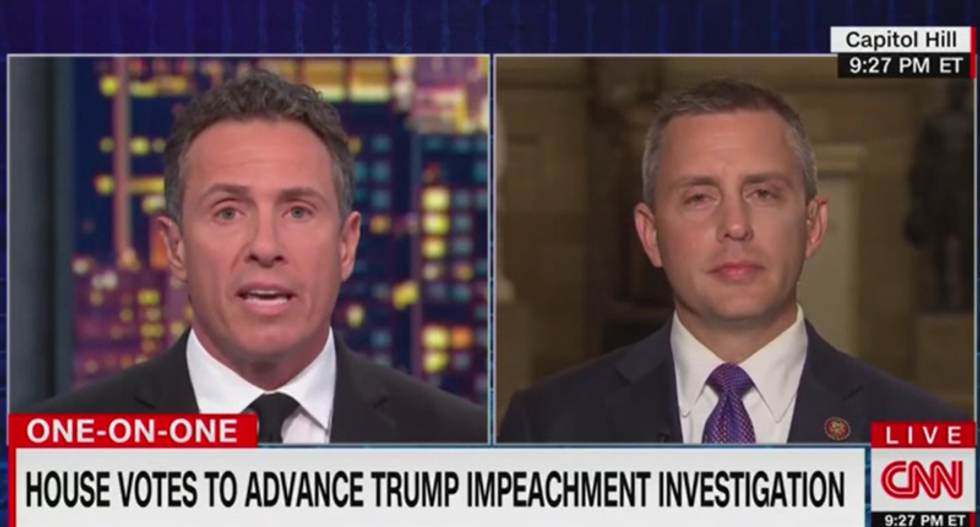 "You guys wanted a vote, today you got a vote on the procedures and nobody voted for it," said Cuomo. "Why even ask for a vote?"

"The problem with this resolution is it has the appearance of fairness without any actual fairness in it," said Armstrong. "I've been a part of this process since the first day I got in Congress and I can tell you I've never seen anything that has made a determination before the trial has happened in any way, shape or form that quite relates to this."

"What determination has been made?" asked Cuomo.

"The first media interview I got asked about impeachment on January 3, and I said there's absolutely no chance they can't do it," said Armstrong. "I've been in Congress since January and I knew that the day I walked in the door. We started with Michael Cohen, walked through the Mueller report, Russia conspiracy, Russia conspiracy, we had concrete evidence of Russia conspiracy from the chairman of the Intelligence Committee. That proved not to be anything and then we moved into Mueller, and when the president wins re-election and if we don't take back the House, we'll start again."

"You're making this sound like it's in a vacuum," Cuomo shot back. "One of the president's lawyers is sitting in jail, the other has two investigations, a criminal and a counterintelligence investigation going on into him, and he had indictments and people put in jail for other reasons that were in the campaign. It's not like nothing came out it, and we're not even listing the ten potential counts of obstruction. So I wouldn't call it a nothingburger exactly. Dealing with Ukraine, what do you think was done today that hasn't been the standard in impeachments past?"

"I spent ten years in a courtroom and six years running a committee in the state Judiciary Committee," said Armstrong. "We would never, ever treat witnesses this way, have questions this way, when you're the prosecutor and the judge and the overruling. I want to make a couple things clear. When we equate this to a grand jury or a special investigation, let's be honest. If there were this many leaks, somebody would be in jail."

"When Congress [impeached] Clinton, you guys were in charge then and you did it exactly this way," countered Cuomo. "In fact, all of the different operations of process that were put into this resolution were created by Republican majorities. This is the way it was done in the past, it's the way your party wanted it. Why all this hue and cry now about it being so unfair?"

"If this comes out and they give everybody due process when this comes out, call me really skeptical about that happening, then we'll see how this goes," said Armstrong.