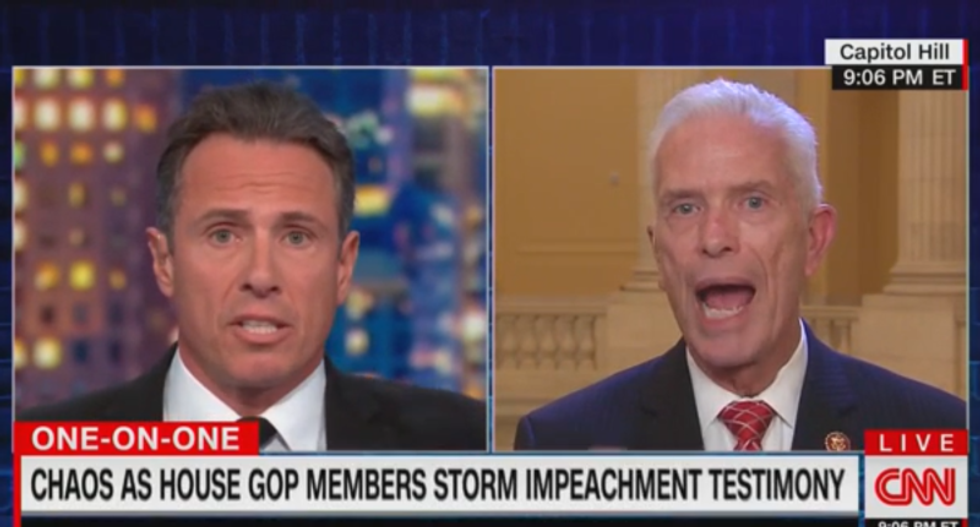 On Wednesday's edition of CNN's "Cuomo Prime Time," Chris Cuomo brought on Rep. Bill Johnson (R-OH), one of the Republicans who participated in the raid on the secure room where the Intelligence Committee was conducting impeachment hearings. And Johnson's attempt to defend his behavior did not go well.

"Congressman, did you bring a phone in there?" asked Cuomo.

"Did you bring a phone in there?" Cuomo repeated. "So I can have it for the record?"

"My phone was turned off."

"Did you have it on you?" Cuomo pressed him.

"There was no classified — you don't set the rules there, Chris. The House does."

"Right. It's a violation of House rules, not my rules," shot back Cuomo. "I don't care where you bring a phone."

"Do you want to talk about how many house rules have been violated?" whined Johnson. "Where was the outcry when Democrats did a sit-in and took control of the House floor? I don't remember there being that kind of an outcry. We had to do what we had to do because we were being denied access to the information—"

"That's your spin on it. But Congress is doing it and doing it the way the laws allow," said Cuomo. "Are there no Republicans in that room, councilman? They have access, can ask questions and get equal time."

"The information that is being collected in that room is supposed to be available to everybody member of the U.S. House of Representatives. There are 435 of us here," said Johnson.

"One of the reasons that Trey Gowdy said that these things work better in private," said Cuomo, "the way he conducted most of Benghazi, I don't remember you complaining when you changed the rules to empower—"

"Let's talk about the Benghazi — that was a select committee," said Johnson.

"This is a select committee," said Cuomo.

"No, it's not. It's not a select committee," said Johnson.

"This is the House Intel Committee," Cuomo reminded him — which is indeed a select committee.

Johnson then pivoted to complaining about how there hasn't been a formal vote to start the impeachment inquiry.

"There's no need for one," pointed out Cuomo.

"There certainly is," said Johnson. "Read the Constitution, Chris."

"No, it's not in the Constitution," said Cuomo. "It doesn't save you have to have a full chamber vote to start an inquiry."

"That's what it refers to," protested Johnson.

"That's your interpretation," said Cuomo. "They're doing the investigation right now and Republicans are part of it. You're not running it, you're not in the majority, but you changed the rules that took away power from the minority, now you got to deal with it. Once that's done, if they want to bring articles of impeachment, everything about transparency that you're arguing for will happen. You'll get to bring in counter witnesses and be cross-examined more than do you in committees just now. It's just early and it makes it look like a distraction and a circus play."