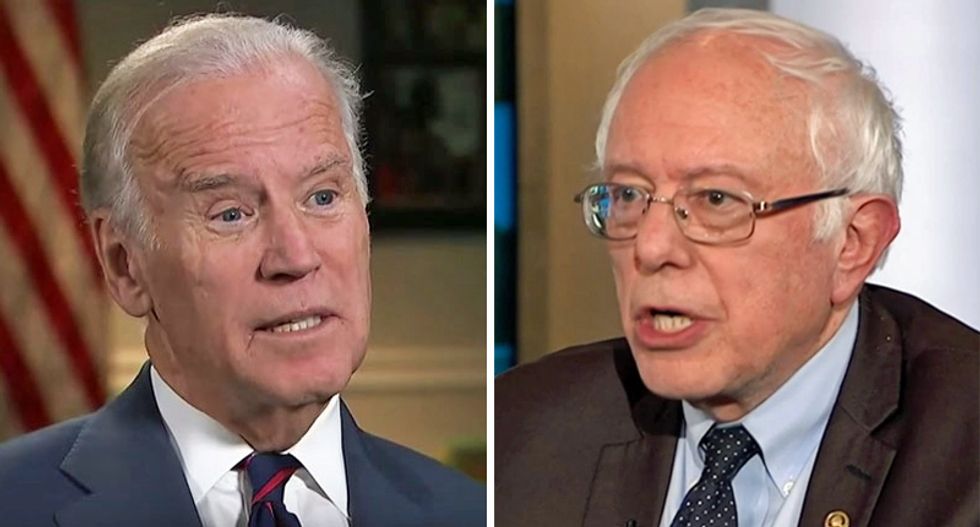 "If your ideas are actually popular, you can raise lots of money without relying on lobbyist fundraisers."

Former Vice President Joe Biden's heavy reliance on high-dollar fundraisers with billionaire real estate tycoons, insurance CEOs, and natural gas executives did not appear to pay off in the third quarter of 2019 as Biden's campaign Thursday night announced he raised $15.2 million during that period, trailing by over $10 million the grassroots haul posted by rival White House hopeful Sen. Bernie Sanders.

Biden's total represents a nearly $7 million decline from the previous quarter, a drop-off that comes as the former vice president has seen his polling advantage erode nationally and in several key primary states. According to the Biden campaign, the average donation to the former vice president over the past three months was $44, a sharp contrast with Sanders's $18 average.

"Imagine spending all of your time clinking glasses with billionaire donors, reassuring them that 'nothing needs to change,' and STILL getting outraised by a small-donor-only socialist."

Sen. Elizabeth Warren (D-Mass.), who has gained on and surpassed Biden in recent polls, has not yet unveiled her fundraising numbers for the third quarter.

Biden first announced his totals during a big-money fundraiser Thursday in Palo Alto, California, where tickets sold for $1,500 and $2,800, the latter being the maximum amount an individual can donate to a presidential campaign.

The former vice president told his rich supporters that the United States doesn't "need some radical, radical socialist kind of answer" to inequality, an apparent shot at Sanders, who identifies as a democratic socialist.

"You've just got to make capitalism work like it's supposed to work. We've got to save capitalism from this guy," Biden said, referring to President Donald Trump.

Progressive critics were quick to seize upon Biden's underwhelming fundraising numbers as evidence of the limitations of relying on billionaire donors and the benefits of Sanders's grassroots approach.

"When you rely on a small number of wealthy donors who max out at $2,800, your pool is gonna dry up," said Alex Kotch, senior investigative reporter and editor at Sludge. "Sanders relies on over a million, mostly small, donors, most of whom can keep donating."

"If your ideas are actually popular," added Kotch, "you can raise lots of money without relying on lobbyist fundraisers."

As the New York Times reported Thursday, Biden "spent much of his time at high-dollar fundraisers" during the final days of the third quarter, "often attending two or even three in one day as he visited wealthy enclaves like Bel Air, Calif., and Park City, Utah."

The socialist magazine Jacobin tweeted in response to Biden's numbers, "Imagine spending all of your time clinking glasses with billionaire donors, reassuring them that 'nothing needs to change,' and STILL getting outraised by a small-donor-only socialist."