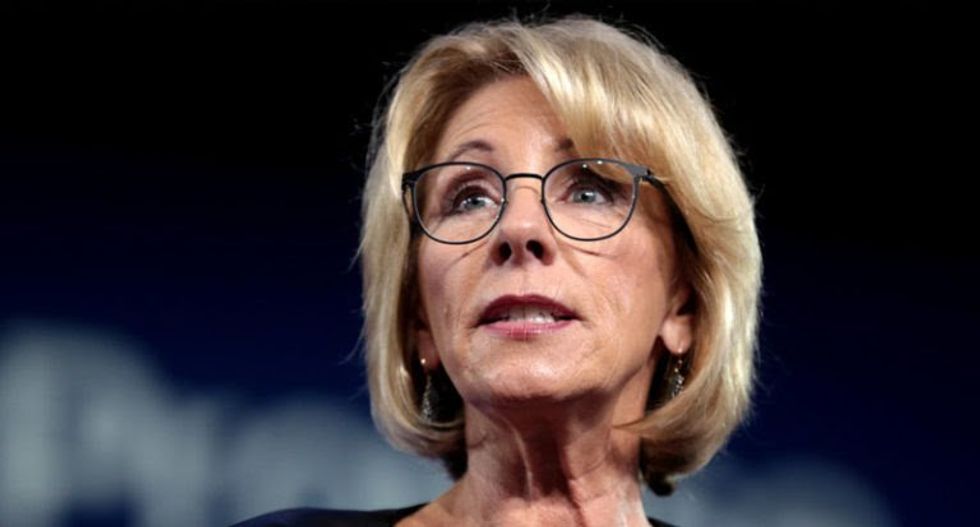 Secretary of Education Betsy DeVos has just admitted that under her leadership nationwide education test scores have dropped so far they are “devastating.” Her plan: more of what she’s been doing for nearly three years.

DeVos was one of Trump’s first cabinet secretaries confirmed by the Senate. She has been Secretary of Education since February 7, 2017.

“Fourth- and eighth-grade average scores on the ‘Nation’s Report Card,‘ released today, declined since the 2017 assessment, except for an increase in mathematics for fourth graders,” Politico reports, in an article titled, “Test scores slump in ‘Nation’s Report Card.’”

How bad is it?

That 40-year grasp is illogical. There are few teachers who have been teaching for 40 years.

“This must be America’s wake-up call,” the Secretary continues. “We cannot abide these poor results any longer. We can neither excuse them away nor simply throw more money at the problem.”

DeVos’ plan is to privatize as much of the education system and infrastructure as possible. Her “solution” to “devastating” education test scores is more vouchers, more charter schools, more federal, state, and local taxes being shoveled into the hands of her friends who run those programs.

She calls it “education freedom,” and claims it is “the only way to bring about the change our country desperately needs.”

But even Secretary DeVos admits her plan is not working.

“On the whole,” The Washington Post reported earlier this year, “charters have failed to live up to their promises.”

In fact, charter schools have been proven to perform no better overall than public schools.

“Rigorous research, from groups like Mathematica Policy Research and Stanford University, has found that average charter performance is roughly equivalent to that of traditional public schools,” The Post continues. “A recent study in Ohio, for instance, concluded that some of the state’s charters perform worse than the state’s public schools, some perform better, and roughly half do not significantly differ.”

And every child who is placed in a charter school means a loss of funding for public schools.

Why does DeVos insist on pushing her damaging agenda?