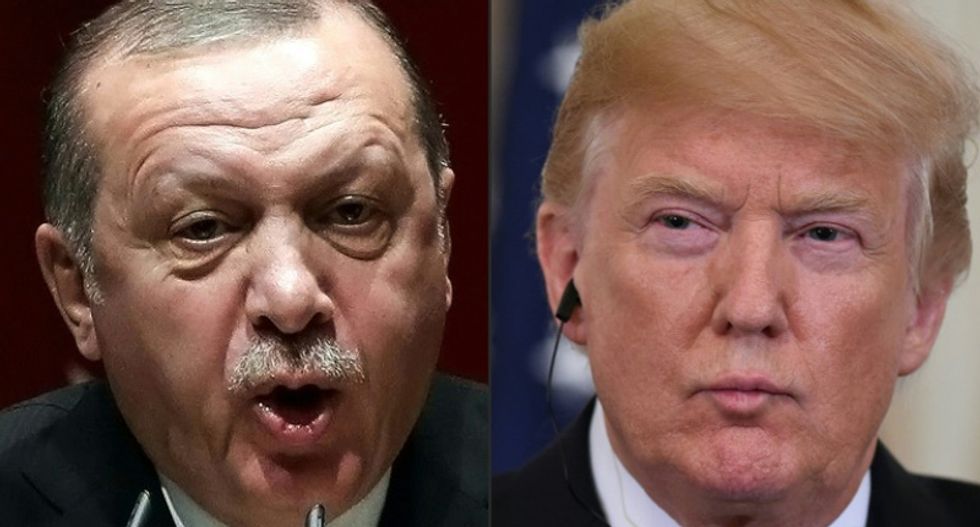 I’ve never seen anything like what’s going on between the president and his party.

On the one hand, Donald Trump got bulldozed Sunday night by Turkey’s autocratic ruler. Evidently, he decided after the fact to pull US forces out of Syria, but there’s ample reason to believe it was a face-saving decision. As I wrote Tuesday, Recep Tayyip Erdogan probably said he’s attacking the Kurds, like it or not, and if Trump didn’t want to explain dead Americans, they’d better get out. To be sure, Trump said later he was fulfilling a promise to get out of overseas wars. But campaign promises are not usually fulfilled after a foreign leader says he’s gonna do what he’s gonna do.

On the other hand are the Republicans, especially in the US Senate, who have already decided to die on Trump’s hill but who also can’t tolerate the humiliation of a weak Republican president getting rolled. They can’t abide, moreover, by the fact of US betrayal of the Kurdish people, an ethnic minority, that has bled and died in the name of freedom alongside Americans in the prosecution of our “war on terror.” Yet the Republicans can’t acknowledge their role in creating a looming humanitarian crisis.

They can’t, or won’t, because doing so would be conceding that a political party once feared by the world’s dictators and totalitarian regimes has now become, under Donald Trump, pathetically impotent. Foreign governments used to take seriously the words of US senators like war-hawk Lindsey Graham. Now, Erdogan can act with relative impunity, safe in the knowledge that neither Graham nor his party will act in time to stop Turkey from slaughtering the Kurds. After all, it was the Russians who attacked the US in 2016. The GOP stepped aside. Why would the party stop Turkey now?

As if to illustrate the GOP’s impotence, Graham told Erdogan via Twitter that, “You do NOT have a green light to enter into northern Syria. There is massive bipartisan opposition in Congress, which you should see as a red line you should not cross.” That was last night. By this morning, word came of the Turkish military already crossing over in a “long-expected offensive into northeastern Syria targeting” Kurdish fighters “that have played a central role in the fight against the Islamic State militant group,” according to the Post. I can imagine what Erdogan would say to Graham: “Oh, you have ‘massive bipartisan opposition,’ eh? Get back to me when you grow a spine.”

Perhaps Graham was merely trying to save face (with other “proud and patriotic” Republicans, that is), but it’s worth asking what he hoped to achieve by drawing a “red line.” Lindsey’s threat of “massive bipartisan opposition” assumes that the Republicans are committed to the democratic process, and that the senator’s words carry the symbolic weight of the electorate, a force that would, in ordinary times, influence a sitting president and his decision-making with respect military matters.

But these aren’t ordinary times, because the Republicans have long mounted an undeclared war on liberal democracy and, consequently, surrendered nearly all of their global prestige and influence. It’s ironic that an autocratic ruler like Erdogan, who has himself mounted a declared war on Turkey’s liberal democracy, can see so clearly the result of a GOP in thrall to Donald Trump. He’s saying, in effect, “I see your ‘massive bipartisan opposition’ and raise you war crimes. How ’bout them apples?” He’s explaining Graham to Graham, but Graham seems to deny being a toady. Meanwhile, many Kurds will die, America will decline, and all the Republicans will do is pout.

There’s one more thing, something that elevates Republican humiliation to the level of the sublime. Turns out, the Turks are going to war with the Kurds with backup from—wait for it—the Kremlin! The Post’s David Ignatius reported Tuesday that the “Turkish attack appears coordinated with the Russians. Russian-backed forces are mobilizing to invade the Kurdish area from the south—towards Tabqa and other spots. Meanwhile, ISIS is mobilizing sleeper cells in Raqqa and attacks have taken place tonight.”

Yes, the government that helped Donald Trump win the presidency in 2016, using cyberwarfare that the Republicans knew about but turned a blind eye to, is the same government now forcing the Republicans to eat their humiliation. So far, they seem to be all too willing to fill up. Like I said, I don’t know if I’ve ever seen anything like what’s going on between the president and his party. It’s truly a sight to behold.