Even Fox News is calling out Trump — and it’s causing 'tension' at the network: MSNBC's Ari Melber 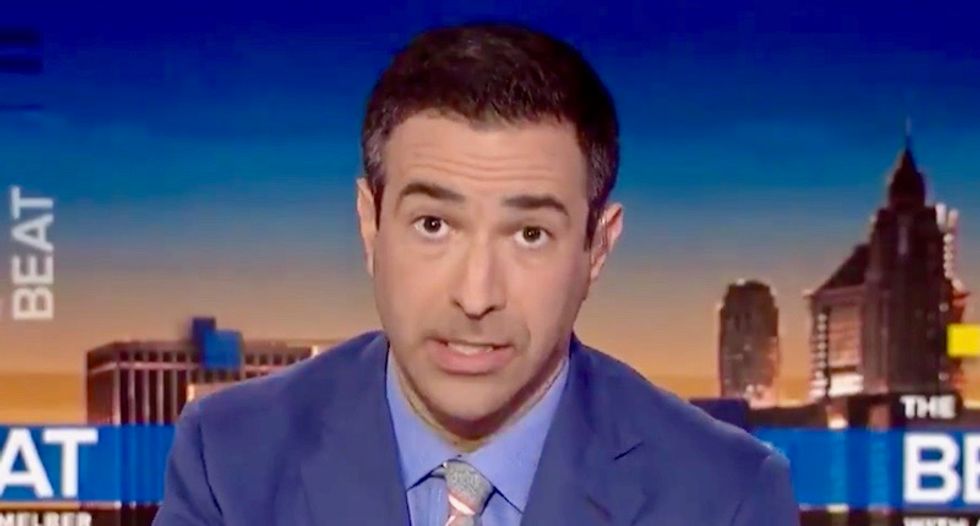 The Ukraine whistleblower scandal and its fallout is quickly snowballing into a nightmare for President Donald Trump. And as MSNBC's Ari Melber noted on Thursday, even Fox News seems to be wavering — or at least internally quarreling.

"The impeachment probe of Donald Trump has many people rattled, including insiders in the Trump orbit," said Melber. "Consider these new subpoena threats hang not only over him but people around him. Now there’s talk of a new career move."

"We ought to start our own network and put some real news out there, because they are so bad, they are so bad for our country," said Trump in a clip.

"There’s a context to this," said Melber. "Because Fox News, of course, has embraced Trumpism in the modern era, but there are dissenting voices, to be fair and accurate. For example, Judge Andrew Napolitano, a frequent Fox analyst, is out in public saying what Trump did is criminal and impeachable."

"Every member of his National Security Council said give him the aid, the Russian tanks are aimed their way," said Napolitano in a clip. "But he held up that aid and instead asked for a favor, which arguably was for his political campaign. That was a violation of federal law. That is an impeachable offense."

"That’s just one voice on the network, but it is a serious legal voice," said Melber. "It’s clearly got some people rattled. Take a look at the politics of this at Rush Limbaugh’s view."

"We’ve even got Never Trumpers now all over Fox News," complained Limbaugh. "There’s nothing hard to defend about the phone call, you just don’t want to defend it. You know, Fox really ought to change the name of the network from the Fox News Channel to the Fox Never Trumper Network."

"That’s overstatement, but there is a debate that has really percolated, including between two well-known anchors of the Fox audience — these people Trump knows all about, and it’s spilled out into the open," said Melber.

"It is a crime for the president to solicit aid for his campaign from a foreign government," said Napolitano in a clip on Tucker Carlson's show.

"Attacking our colleague on our air, in our work home, is repugnant," said reporter Shepard Smith in yet another segment.

"Unlike some day side hosts I’m not very partisan," said Carlson.

"The real issue is the phone call, the claim that the president pressured a foreign leader," said Smith.

"That’s reportable, you can watch whatever channel you want," added Melber. "I’m reporting it to you because Donald Trump does rely on people on that channel. He’s hired out of that channel. People leave the administration and go back to that channel. And this kind of tension is clearly a product of the tension around Donald Trump’s presidency and the threat of impeachment. Meanwhile, there’s this blunt message to the president himself."

"And then consider Chris Wallace, who is a veteran of conservative Washington, with this message for viewers, and you can decide as you listen to it, who else it might have been intended for."

"To dismiss this [whistleblower] as a political hack seems to me to be an effort by the president’s defenders to try to make something — to make nothing out of something and there is something here," said Wallace.