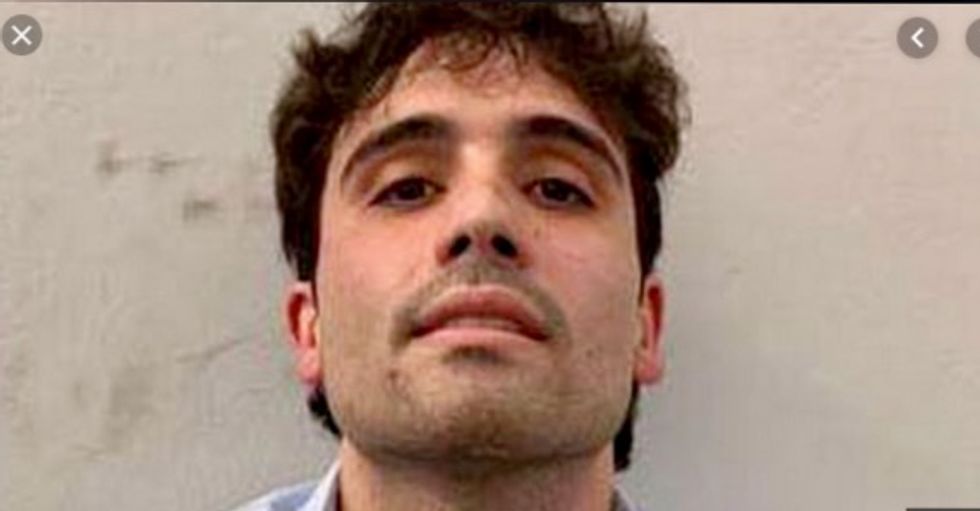 Security Minister Alfonso Durazo said soldiers on a routine afternoon patrol came under fire from a residence in the state capital, Culiacan.

He said they responded by taking the house and detaining four people inside, including Ovidio Guzman, one of several sons of "El Chapo" who have partly taken over the Sinaloa cartel since he was extradited to the United States in 2017.

Cartel gunmen then "surrounded the house, outnumbering the soldiers," and began a massive assault on various parts of the city, Durazo said.

That triggered an hours-long battle that left blazing vehicles strewn across the street and sent terrified residents running for shelter.

"In order to protect the greater good, the people of Culiacan's safety and well-being, the (federal government's) security cabinet decided to suspend said actions," Durazo said in a video message.

According to Mexican media reports, that included freeing Ovidio Guzman.

Durazo said the security cabinet would travel to Culiacan to personally oversee the next steps. Officials were due to give a press conference in the western city at 6:45 am (1245 GMT) Friday.

Some panicked drivers abandoned their cars in the middle of the street to take cover from the deafening gunfire.

Gunmen blocked roads and highways into the evening, bringing the city of 750,000 people to a standstill, AFP journalists said.

Sources in the Sinaloa state government speaking on condition of anonymity said police officers had been wounded.

They also said an unknown number of inmates had escaped from the Aguaruto prison in Culiacan amid the chaos.

The state government said it was "working to restore calm and order in the face of the high-impact incidents that have occurred in recent hours in various points around Culiacan."

It called on residents to "remain calm, stay off the streets and be very attentive to official advisories on the evolving situation."

"El Chapo," 62, was sentenced to life in prison in July for trafficking hundreds of tons of cocaine, heroin, methamphetamine and marijuana into the United States over the course of a quarter-century.

However, his cartel remains one of the most powerful in Mexico.

Guzman's extradition unleashed an initial period of instability in the group, as Ovidio and his brothers waged war with cartel co-founder Ismael "El Mayo" Zambada for control, leaving a trail of bodies in their wake.

But the situation has since stabilized into a reluctant truce.

Guzman, whose nickname means "Shorty," was re-arrested in 2016 after a brazen prison escape -- the second of his career.

He is considered the most powerful drug lord since Colombia's Pablo Escobar, who was killed in a police shootout in 1993.

After being convicted in a New York court, "El Chapo" is now serving a life sentence in the notorious ADX federal maximum security prison in Colorado.

Ovidio and his brothers have tried to fill their father's shoes, but anti-narcotics experts portray them as flashy party boys who have little ability to run the business side of the cartel.

Reports that Ovidio had been arrested and then freed triggered harsh criticism of Obrador's security strategy.

The leftist leader, who took office in December 2018, has struggled to rein in the brutal violence racking Mexico.

Earlier this week, 28 people were killed in two separate gun battles in the restive states of Michoacan and Guerrero.

Mexico has registered more than 250,000 murders since the government controversially deployed the army to fight drug cartels in 2006.

Many experts blame the "drug war" for spiraling violence, as fragmented cartels battle each other and the army.